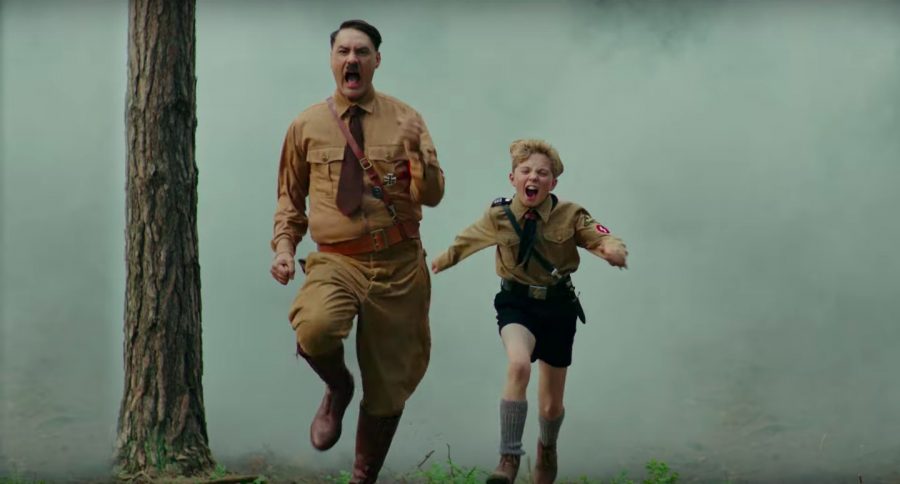 In 2004, Christine Leunens published her novel Caging Skies. Shortly thereafter, independent filmmaker Taika Waititi found it and adapted it for a screenplay. Despite the script being praised by those who got to see it, it spent a long time on the shelf. Eventually, though, Waititi became popular for films like What We Do in the Shadows, Hunt for Wilderpeople, and, most recently, Thor: Ragnarok. With Waititi established as a filmmaker, he was finally able to release his project, which is now known as Jojo Rabbit.

Jojo Rabbit follows a young boy in Germany named Jojo Betzler (Roman Griffin Davis) who is obsessed with politics and the ways of the Nazis (don’t worry, it’s not offensive at all). He is in a Nazi training program led by the half-blind Captain Klenzendorf (Sam Rockwell), and he has an imaginary friend who is a wacky and historically inaccurate 10-year-old version of Hitler (Taika Waititi). At this program, he acquires the nickname Jojo Rabbit after he is told to kill a rabbit but is too scared to do so. He is sent home from the training camp after blowing himself up. He survives this but leaves the camp with a scar on his face. Upon returning home, he finds a girl (Thomasin McKenzie) living in his house. He discovers that she is a Jewish girl and that his mother (Scarlett Johansen) has been hiding her from the Nazis. Jojo now tries to deal with his stagnant ways and question what his country is really fighting for.

While this movie might have a questionable premise, I really enjoyed it and laughed a lot. Critics were divided on it because some thought the movie couldn’t successfully blend humorous and dark tones, but I disagree. I felt that the film was incredibly hilarious when it needed to be but it was serious when it had to be as well. The film portrays Nazis how they deserve to be: as morons. They are brutally mocked, and you can clearly see how blind their perspective is. Taika Waititi’s version of Hitler is quite amazing. He does a phenomenal job of playing this man as an absolute monster, but then he goes the extra mile and makes him so goofy that you can’t help but laugh.

Part laugh-out-loud comedy, part sweet and heartfelt film, it leaves viewers with inspiring messages despite its bleak setting and subject matter. These messages are important ones for today’s day and age: you should always be open-minded, hate is never the answer, and love is the most powerful thing in the whole world.

Overall, Jojo Rabbit may have a crazy premise that seems implausible, but it works. The story is amazing, the messages are inspiring, the cast does a great job, and the film is just downright hysterical. It’s a film that is not playing in a lot of theaters, but you can catch it at AMC Garden State and at several cinemas in New York City.