Peter Luger May Have Its Sputters, But It’s Still Sizzling 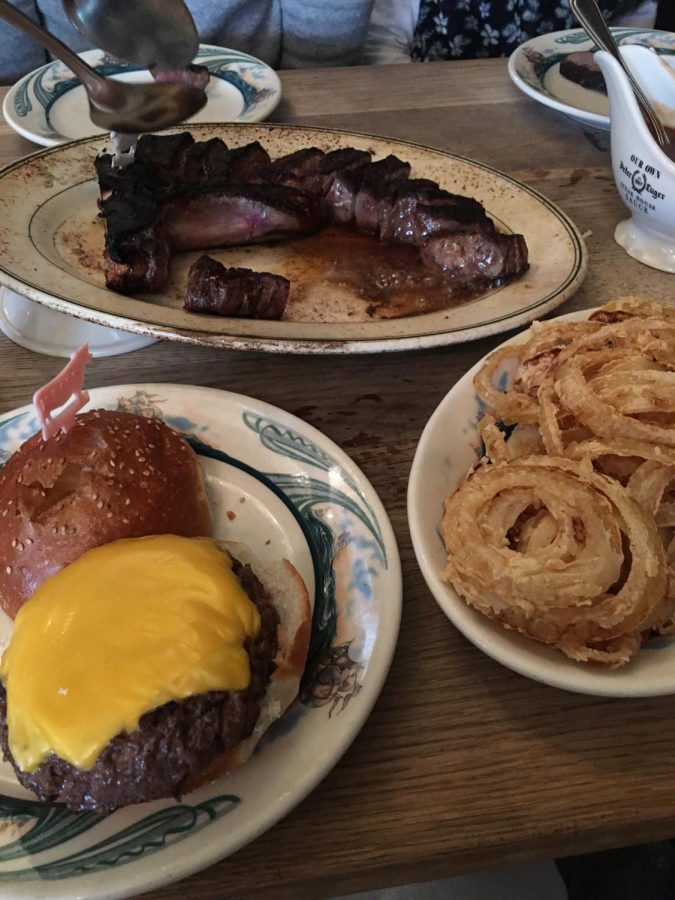 Steak, burger, and onion rings at Peter Luger in Williamsburg.

Peter Luger is one of, if not the most, prominent steakhouses in New York City, as it was part of the steakhouse scene back in 1887 when the city essentially propagated the modern idea of a steakhouse. Famed for its tender, aged porterhouse cut, the restaurant provides high quality meat in its German beer hall setting. It has been named by Zagat Survey as the best steakhouse in New York for 30 years in a row and earned a Michelin Star, reasons for which you can find in any raving review about the restaurant.

However, not all critics loved the place. Ever since The New York Times critic Pete Wells published a scathing, zero-star review of the restaurant titled “Peter Luger Used to Sizzle. Now It Sputters” a month ago, there has been a heated debate over whether or not the critique is valid. Fans of the place consider the review absurd, saying that Peter Luger has consistently upheld its reputation for years and that their meals at the steakhouse were always top quality. On the other hand, there are many New Yorkers who have now gained courage in giving their doubts about the institution, claiming that, indeed, the food quality has deteriorated over the years and the restaurant is overrated. Some are relatively in the middle, only giving complaints about the steep prices. Peter Luger, on its part, replied, “While the reviewers and their whims have changed, Lugers has always focused on doing one thing exceptionally well—serving the highest quality of steak.”

I don’t have as much experience at the restaurant and the years of familiarity Pete Wells has, and the first time I ate there was at the Greatneck Long Island location, less popular than its Williamsburg, Brooklyn counterpart. My experience that time was excellent, as the food was delicious and the waiter was amiable. Nevertheless, the controversial location is in Brooklyn, so I recently went to try it out.

The beginning of the meal was, to be honest, underwhelming. Peter Luger serves a generous amount of bread in its bread basket, and a variety at that, including classic white buns, caraway salt sticks, and onion bread; however, it was cold, making it hard to chew. The Caesar salad had fresh romaine and crisp croutons, but it was a little overdressed, understandably called “drippy.” The onion rings were different from those of other restaurants in that they were only slightly crispy and a little flimsy, rather than the ones that you can find thickly coated in batter and fried, and they were slightly sweet and bland. Clearly, the food was not bad, but not certainly enough to validate its revered reputation.

As for the main and side dishes, the burger that we ordered was cooked medium rare, with a big, fluffy brioche bun, a slice of cheese, and some onions. There were no other ingredients like lettuce or tomatoes like in most burgers, but the juicy meat made any other ingredients unnecessary. The only problem with the burger was that the structure didn’t hold: the bottom bun fell apart from the juices of the patty. The Baked Oversized Potato with sour cream was not bad, but nothing special, either.

By the time the steak came, I wasn’t expecting much, and concluded that Pete Wells’s review was a little more brutal than necessary but still true. However, these thoughts dissolved like steam when the porterhouse steak for two arrived. I could hear and smell the sizzling grease and butter, which built up my expectations. Our medium porterhouse was cooked with a crispy exterior, from which we could taste the char of the meat, and a juicy, tender interior. Considering how crunchy the steak was at the edges, it almost seems impossible the way it was cooked to be so chewy on the inside. For dessert, I ordered the apple strudel, which was served with a heaping bowl of homemade whipped cream. The pastry was soft, cinnamony, and everything you expect an apple strudel to be, but it was perfectly complemented by the whipped cream, which added just enough sweetness.

Personally, most of the meal didn’t wow me as much as I was hoping it would. Nevertheless, I would go back if I had the chance, if only for the crispy, juicy, and tender porterhouse steak, the equally delicious Peter Luger burger (even if it does fall apart a little), and even the sweet apple strudel. Suffice to say, the steak alone is proof that Peter Luger is still hot and sizzling. In addition, the service wasn’t as gruff as reviewers claim it to be. I wasn’t alive in the 1990s to try the steakhouse like Pete Wells, so I can’t account for whether or not the quality of the restaurant has declined since then, but I can say this: even now, Peter Luger is still delicious and worth going to. Maybe my experience was different from those of others because the restaurant has become more aware of negative criticism after Wells’s review, or because I went during lunch, when it was relatively less busy.

If you want to go, know that the restaurant only accepts US debit cards or cash, and that there is a wait even if you have a reservation, and if you don’t, it’s basically impossible to eat there that day.