The Lost Art of Mars Argo

In 2009, Mars Argo entered the Internet via YouTube. She and her boyfriend, Titanic Sinclair, established their strange “Computer Show (example linked above)” to raise exposure for Mars Argo’s indie rock music. In 2014, “The Computer Show” abruptly ended and all of Mars Argo’s content, including her music, was deleted from the Internet. Four years later, the case of her enigmatic disappearance was solved as she emerged from the shadows with a lawsuit in hand.

This story starts off as an age-old tale of modern love. Argo and Sinclair met on Myspace. With their shared unorthodox creativity, they co-founded the YouTube channel Grocerybagdottv, where their strange, slightly creepy skits and music videos spread among a tight-knit group of intrigued followers. These followers were drawn to Argo’s unique, beautiful voice and thoughtful lyrics, and Sinclair’s artful production. They were in for a disappointing surprise when the music and content they loved so much was suddenly gone for Grocerybagdottv, leaving them with only three videos to chew on.

Almost at the same time, a new YouTuber emerged with an uncanny resemblance to Argo’s style. Her name was Poppy, or ThatPoppy, and production credits to all of her videos were given to Sinclair. Poppy and Sinclair went on almost the exact same route that he took with Argo: making strange, controversial videos in hopes that Poppy could build a persona that would make people want to listen to her music (which, in my opinion, is nowhere near as good as Argo’s).  This worked far better for Poppy than it did for Argo, as Poppy could now arguably be considered a household name, or at least a recognizable one to a lot of Internet fans, while Argo remains to be a small, cult-followed figure.

It was assumed that Argo and Sinclair had gone through a nasty break-up, and he left “The Computer Show” to emulate that project with a new muse. However, things got messy when Argo finally came out and spoke her truth. 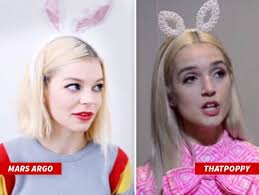 This truth,  depicted in the lawsuit, exposed Sinclair as an abusive and controlling partner, who stalked and harrassed Argo well after their break-up. Argo had substantial proof convicting Sinclair of these offenses, including photographs and text messages. The most substantial part of the lawsuit read, “From November 2014 to the present, through the Poppy project, Mr. Mixter [Sinclair] and Ms. Pereira as Poppy, deliberately copied Mars Argo’s identity, likeness, expression of ideas, sound, style, and aesthetic in YouTube segments, music videos, live performances, internet videos, and other performances or shows.”

When comparing Poppy and Mars Argo videos side-by-side, the resemblance is hard to ignore. That could be chalked up to Sinclair’s production style, so it’s a slippery slope as to whether or not it can truly be considered “copying,” especially because neither Poppy nor Sinclair have admitted guilt to such accusations.

“On one hand you have the question of who owns the creative liberty of this concept of a trapped pop star and on the other hand you have to ask if it’s really a super original concept,” said last year’s Editor-in-Chief, Evan Hecht (’19).  “I think Mars Argo has every right to be mad about the situation, especially if it was a collaborative effort in creating that character, but at the same time I also think that she doesn’t have the right to be mad because that’s just how business works. If it’s not working out, they’re going to move on.”

The lawsuit was eventually settled, and the most substantial thing that came out of it was that Mars Argo was able to gain the right back to her creative project. Today, her music and videos are strewn all over the web, though(most are still not on her channel), and many fans continue to root for her. The strangest thing about this whole situation is that, although the lawsuit seemed to indicate that Mars Argo was finally ready to cement her place back in the alternative indie rock scene, after it was settled, she immediately retreated back into the shadows and nothing new has been heard from her since.

Fans feel a void where her music used to be, as it’s not available on music streaming services and there doesn’t look to be anything new from her coming soon, or possibly, ever.

When listening to her music, it is easy to see that she was far ahead of her time, with catchy, indie choruses and dark lyrics that would blow up in the indie/dreampop scene today. With bedroom pop a new phenomenon, things could have gone much differently for Mars Argo if she had started a little later. Furthermore, when examining the lyrics of her songs, it is quite easy to decipher how trapped and abused she felt by Sinclair: “I was afraid to put myself on the line for a boy / Until he put me in my place and showed me how to enjoy, myself / I think I need your help / I think she’s coming back (taken from her last song on Groverybagdottv, “Using You”).

The circumstances surrounding Mars Argo and her art are quite dark, eerie, and enigmatic; still, that’s what keeps fans like me coming back to those lowkey, compilation YouTube videos that pile up snippets of her songs in the hopes that they’ll be able to recapture what it was like when she was still releasing music. I truly hope she comes back, and hopefully, it will be with a healed mind and body, rather than with a lawsuit.