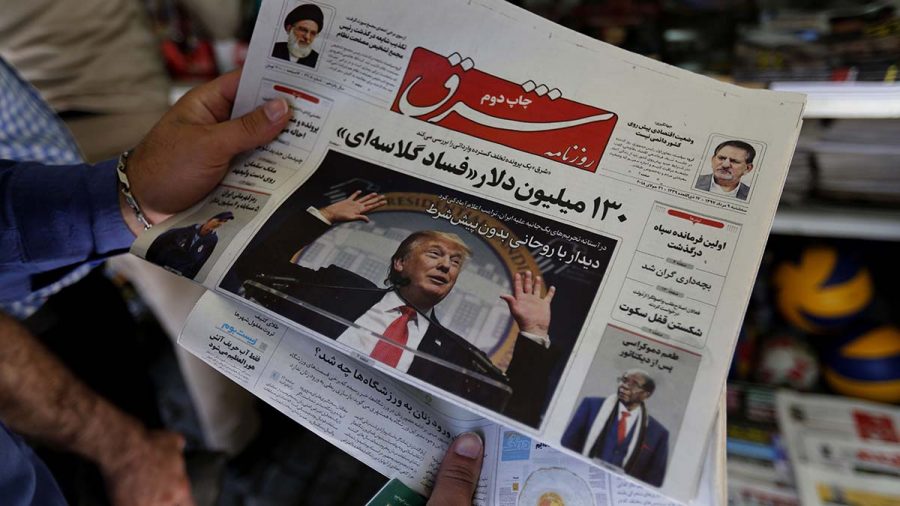 A man takes a glance at a newspaper with a picture of US president Donald Trump on the front page, in the capital Tehran on July 31, 2018. - Iran's currency traded at a fresh record-low of 119,000 to the dollar today, a loss of nearly two-thirds of its value since the start of the year as US sanctions loom. (Photo by ATTA KENARE / AFP) (Photo credit should read ATTA KENARE/AFP/Getty Images)

In early November of this year, I visited my mother’s home country, Iran. Everything was as normal as it could be for a country with an oppressive government. The government has always been restrictive, but less than a week after I left in mid-November, it cracked down even more. It shut off Internet access and raised gas prices. The people of Iran could take no more from the oppressive government, and they finally retaliated. About 1,000 people were killed after the government issued an order for police to open fire on protesters. What is even more shocking is the lack of media coverage in America.

During Trump’s presidency, he has issued heavy sanctions against Iran and, just last week, ordered the drone strike on Qassem Soleimani, the Major General of the Islamic Revolutionary Guard Corps. Iran’s economy flourishes off its oil exports, so Trump instituted sanctions to strangle Iran’s economy, which was successful. The cost of living has become extremely high. The people are the ones feeling the effects of the government’s faults. After the hike in gas prices had been raised, there was more unrest than ever seen since the 1979 revolution.

There is little known about the murders of the protesters, but Fox News has said there could be as many as 1,000 deaths. Children as young as 13 have been named dead. There have been protests all over the Middle East, including in Lebanon, Iraq, and Egypt. The desire for freedom is more intense than ever before, yet instead of getting involved, the United States is more distant than ever. These protests started in mid-November and are only being minimally reported on now. This shows how little America truly cares about people struggling in other countries. I have seen first-hand the effects on the people of Iran. Trump has done nothing to call out injustices against the Iranian people. and as of last week he has further inflamed relations between the US and Iran.

During the time of the revolution, America backed the overthrowing of the Shah. It then helped put in place the current oppressive regime. America then stepped away from the issue and allowed Iran to fend for itself. America got involved and caused a mess, but did not resolve it. Iran and its people are now feeling the effects.