Self-Realization on the Seven Dwarfs Ride 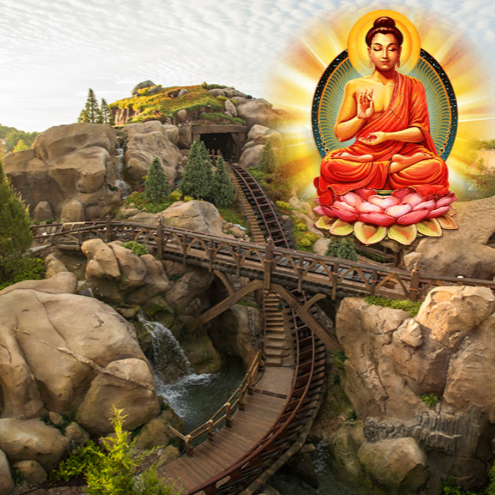 In the summer before 9th grade, I went on a short trip to Disney World and Universal Studios with my immediate family and grandparents. My siblings and I were excited; in fact, more than excited—we were absolutely psyched. Who wouldn’t be? The opportunity to temporarily kick it in the realm of anthropomorphic mice, riding mind-blowingly elaborate and immersive roller coasters, and indulging in the wonders of American consumerism, was beyond appealing. Not to mention, we were equipped with FastPass wristbands which, with the strategic employment of the Disney Parks app, offered a nearly straight line to the front of any ride. However, I was not aware that, on the third day of my trip, I would find myself in the midst of a meditative ceremony led by none other than the Seven Dwarfs.

Yes, on my third day at the Parks, we went to the Magic Kingdom. Everything was going according to plan; we were skipping lines left and right, soaking in the artificial scenery, and checking the app frequently for the next redeemable FastPass to engage in more expedited theme park fun. After yet another successful ride preceded by a luxurious stroll past the masses waiting in the 45-minute line, my mom scanned the app for another opportunity to skip ahead. Our passes could be used for the legendary Splash Mountain…in thirty minutes.

“That won’t cut it,” I said. “Is there another ride in the meantime?”

“Well, let me check, there’s the new Seven Dwarfs Mine Train. It’s redeemable in two minutes so we’re going to need to rush over to get on in time,” my mom responded.

“If we get there fast enough, we can use the passes for both rides,” my brother chimed in.

So, like intrepid journeyers, we embarked on the cross-park journey to a ride that I wasn’t previously aware existed.

Upon our arrival, I was greeted by the view of the cartoonish rockpile upon which the mine tracks of the ride were lain and the echoing sound of joyous screams from riders in the barrel-shaped minecarts. We filed into the FastPass line just on time as I mused to myself, Can I even name all seven? Sleepy, Grumpy, Angry, Dopey, Funky…I guess not. Also, why is it dwarfs and not dwarves? Who made that call?

Suddenly, the steel gates sighed open, and I took a seat alongside my younger brother in the fifth cart from the front. The ride started in the bright Orlando sun, offering a brief aerial view of the Park before plunging us riders into the dark depths of the “mines” to find the dwarfs hard at work. The whole animatronic gang was there, partaking in the extraction of fluorescent gems. Grumpy grunted as he hoisted a bucket of gems in which Sleepy lay snoring. Happy swung his pick-axe at a stubborn gem. Dopey struggled to push a loaded wheelbarrow. Sneezy, as one might expect, sneezed. Upon exiting the mine, the famed tune “Heigh Ho, Off to Work We Go” began to play out of the concealed speakers in the carts. Everything was going smoothly. The ride was surprisingly entertaining despite my limited knowledge of Snow White lore and the childish soundtrack. That was, until the ride shuddered to a stop following our second entry into the mine. Surrounded by the dwarves, we sat in silence. The music faded as a voice crackled onto the speakers.

“Hey everybody, we’re experiencing some technical difficulties, but sit tight and they should be resolved shortly,” the voice nasally echoed.

The song did not resume. So we sat, with no idea as to how long we would be stationed in the dark cave, lit only by the multicolored gems and animatronics in utter silence besides Grumpy’s grunts, Sleepy’s snores, and Sneezy’s sneezes.

This can’t take too long, I thought. I was wrong. By the tenth minute, it felt as if years had passed in the dimly lit cave. However, the cacophony of sneezes, grunts, and snores slowly began to seem rhythmic, even melodic. At this point, my fellow passengers on the ride had given up on small talk. Some dozed off, some checked their phones or cameras. I sat, surrounded by the repeated sounds of the dwarves, concentrating on my thoughts. The grunts, snores, and sneezes began to take the form of a Buddhist mantra, sacred utterances transporting me to a state of meditative serenity. With the dwarves as my seven personal shamans, I felt as though I was ascending to a state of nirvana, reflecting upon my spiritual purpose and means of fulfilling it on a cosmic scale. In tune with the world around me, I saw the meaning of life in the near distance, approaching to the tune of Happy’s calculated pick-axe strikes. Just as I reached to grab hold of the answer, the music resumed and the ride creaked to a start.

“Thank you for your patience, and enjoy the rest of the ride,” the voice croaked.

As the ride shot into the sunlight once more, feeling more aware and spiritually aligned than I had ever before, I thought to myself, I still can’t name all seven of these damned dwarves.