Unity Gifted by the Virus: Muslim and Jewish Paramedics Pray Together 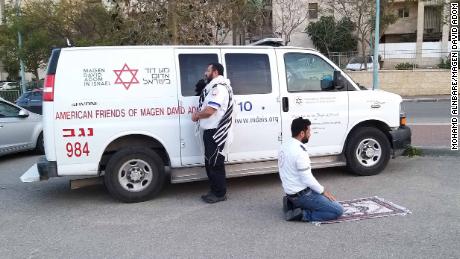 On the early evening of March 26th, two paramedics finished responding to a call in the city of Be’er Sheva, Israel. A 41-year-old woman was reported to have respiratory issues, and the two had rushed to the scene. The clock rolled around 6:00, and once the two had finished attending their call, they used their short break to pray. One stood to face Jerusalem, while the other knelt in the direction of Mecca. Avraham Mintz, a religious Jew, hung his striped prayer shawl from his shoulder. Zoher Abu Jama, an observant Muslim, unrolled his prayer rug from beneath him. The picture, taken by a coworker, garnered millions of likes after going viral on several social media platforms.

“The fact that it is so simple makes it so powerful,” Mintz explained. “I believe that Zoher and I and most of the world understand that we have to raise our heads and pray. That’s all that’s left.” Mintz referred to the fact that through crisis, such as the current pandemic, togetherness emerges and that, though it has enforced separation around the world,  it has also sparked unexpected unity among some groups.

When first seeing this photograph on CNN’s Instagram, I was taken aback. Through all of the countless accounts of hatred between the two sides, finally comes a heart-warming moment. My shock soon became a moment of enlightenment, a moment of pride. The true fallacy in our frequent beliefs was finally affirmed.

The 100 years of the Israeli-Palestinian conflict did not cause a barrier between solely the Israelis and Palestinians, but the Jews and Muslims as well. I, myself, as an Israeli-American Jew, have been taught to see Muslims as the “other side.” In Israel, we are raised with the concept that Muslims are the aliens, no questions asked, that they are the reason every home and building is equipped with a bomb shelter, that they are the reason for all the turmoil.

To be quite honest, I never understood the logic behind these unwritten concepts. The conflict is surely not one-sided. Neither Islamophobia nor anti-Semitism is the solution. Yet, we seem to resort to those unwarranted beliefs when the terror continues to come in circles. Checkpoints in Israel examine the cars of women with a hijab, while rocks are thrown at Jewish soldiers in the West Bank. Our hearts are filled with nothing but coached hatred for the “other side.”

That, brief, 15-minute prayer break admitted to the true absurdity of the Israeli-Palestinian conflict, that our religious discrimination is nothing more than useless. If two men, able to overcome the differences of their religions, are able to pray together, we must follow in their footsteps.

The virus has given us the gift of time, pressing the pause button on the fast-moving world we live in. Let us use this time to allow ourselves to unite, to make peace with our “enemies.” The facts that lie behind every conflict may be the lit matches, while the hatred that we develop is the fire. Once our preconceptions are eradicated, only then can the fire be blown out, as proven by Zoher Abu Jama and Avraham Mintz.