The Raven at Tenafly High School 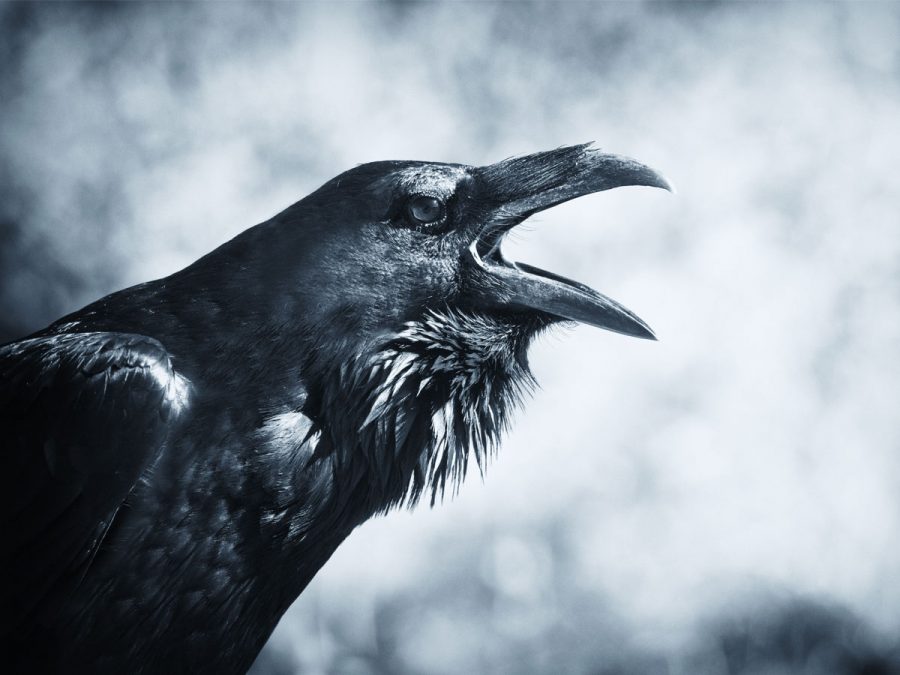 “It must have been early November, when I first encountered the beast,” Mr. Oppedisano recalled.  “In the middle of an early morning AP Lit and Comp class in room 215, I believe Jesse Ryno was in the middle of saying something when through the window I noticed a labrador-sized raven, perched atop an air duct on the roof of the senior hallway. It was peering into the classroom, and appeared to be in disagreement with whatever Jesse was saying, because as he finished, the behemoth looked away from Jesse, shook its football-sized head, and let out a basso profundo ‘Caw.’”

Shortly before the closing of the school due to the pandemic, word spread like wildfire among students and staff of the unexpected presence of a massive raven, patrolling the school grounds with its jet-black wings and observant, glassy eyes. “By the grave and stern decorum of the countenance it wore,” one could almost mistake it as that hallowed fowl described by Poe himself.

Mr. Oppedisano, the first to officially spot the raven, went on, “The class dropped their texts and rushed to the window. As an audience, we spent a few silent moments face to face with this avian horror. Because that’s the thing about ravens, right?  Sometimes that raven looks right at you. Right into your eyes. And the thing about a raven is he’s got lifeless eyes. Black eyes. Like a doll’s eyes.”

Much like “the fowl whose fiery eyes… burned into [Edgar Allan Poe’s] bosom’s core,” the raven made its rounds, occasionally stopping by a window, as Mr. Oppedisano described, to peer into classrooms and the souls of those who happened upon seeing “this ominous bird of yore.”

However, after its initial few appearances, sightings of the raven grew increasingly sparse. The shadow of a creature had seemingly vanished, “leav[ing] no black plume as a token.” The school’s resident birdwatchers noted the departure of the fowl with eyes so “desolate yet all undaunted,” mourning the leaving of such an awe-inspiring and terrifying creature yet silently sighing a breath of relief in the passage of a famed bad omen. Few times in literature has the foreboding visit of a raven hinted at much else than despair or impending darkness. So it seemed that the raven was gone for good, with the passage of months since the “parting [of that] bird or fiend.”

That was until the raven returned once more.

“One afternoon in February,” Mr. Oppedisano explained, “as Mrs. Oppedisano, a coworker, and I were leaving Tenafly High School by a western exit, I had a funny feeling as though we were being watched.  Hunched over the side of THS was the ominous raven. I was certain it was the same Lovecraftian horror from the rooftop, as the sun appeared to avoid shining off from blackened beak and greasy coat, turning my stomach as I remained held by the monster’s glittering eye.”

Mr. Oppedisano went on, “As if to confirm my suspicions, it nodded and let out a hearty ‘Braaaw.’  Mrs. Oppedisano flinched in awe of the foul gargoyle perched atop Mr. Berman’s office. In hopes of ‘having a witness,’ I stopped a student walking behind us, and wordlessly gestured to the thing huddled along the edge of our school, darkening the horizon.  She said ‘That’s a bird.’ I nodded, wiping tears and dribble from my face.”

It was hard for most to understand the importance of the raven’s return. Even Mr. Oppedisano wondered, “How was I supposed to get the next class excited about some bird I just saw?” Mr. Oppedisano described how he “tried to express the importance and gravity of the appearance of said ‘anima,’ as well as the implications of its arrival, [but nobody] was very interested.”

Mr. Oppedisano said, “Since then, I have not seen the raven, although that does not mean it hasn’t seen me.  I sometimes hear a scream on the winds of Tenafly, a guttural “Gruuuaaaaap” in defiance to the sun, and all things good and true.  At least now when that happens, my phone vibrates with a text from Mr. Whitehead asking if that echoing cry was from my white/black whale/raven. I no longer cower alone.”

Now in April, unexpectedly home from school due to the pandemic and forced to upload this article at a later date than planned, I couldn’t help but ask myself, “Is this still worth posting?” The raven now lurks in the shadows and has not been spotted at school due to the simple fact that students and staff haven’t been at school. Of course, I was compelled to publish the article because of Mr. Oppedisano’s epic storytelling and the need for some relief in the form of non-coronavirus news, but the more I began to reflect on the tacitly threatening nature of the raven’s arrival, after discussing with Mr. Whitehead, I began to see the raven in a new light.

Perhaps the raven was in fact an omen, warning of the quarantine to come. Perhaps we should have noticed the raven and pieced the puzzle together.

What we could have done? I’m not sure.

I do wish that, after the pandemic passes, we learn not to ignore signs as individuals and, more importantly, a nation, and take action to protect our citizens at the earliest notice.

That way we will have to experience a global shutdown of these proportions nevermore.