Why the Rising Sun Flag Should Be Banned at the Olympics 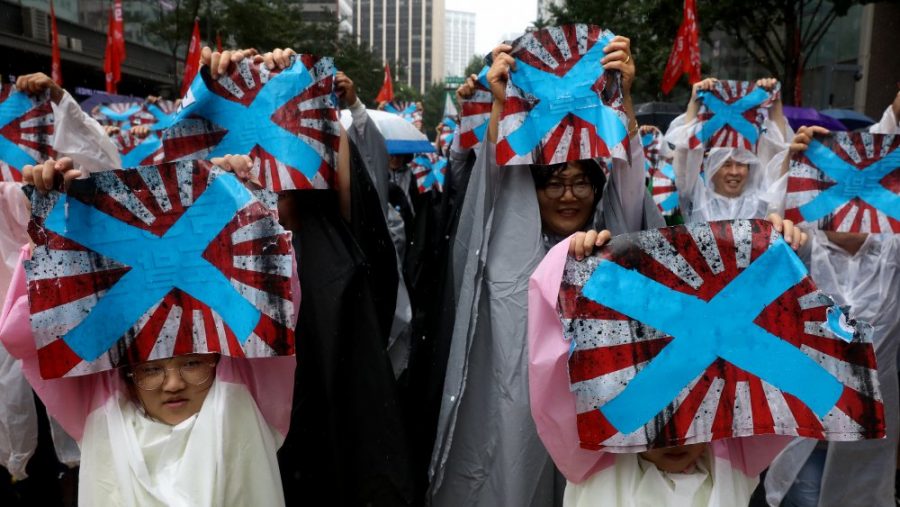 protesters of the flag

The IOC (International Olympics Committee) and the Japanese government have announced that they would permit the use of the Rising Sun flag during the 2020 Summer Olympics. To some, the Rising Sun flag is simply a red circle with sixteen rays. To others, it is a sign of blatant ignorance, disrespect, and cruelty. It is a sign that the Japanese government simply refuses to admit its war crimes.

As a South Korean, I find the use of this flag to be especially atrocious. Japan stood behind the Rising Sun flag during its annexation of Korea between the years of 1910 and 1945. It references past war crimes of Japan, and the use of this flag means the embracing of these war crimes. It is true that I may be biased because of my heritage, but the statistics and memoirs of these recorded war crimes are undeniable. According to Professor R.J. Rummel from the University of Hawaii, the Japanese military massacred between three million and ten million Koreans, Chinese, Filipinos, Indonesians, Westerners, and other victims while standing under this flag. With these statistics, I can say with certainty that the pure fact that the Japanese government’s decision to use this kind of flag at the Olympic Games—an event symbolizing world peace—will seem simply illogical to any intelligent mind.

It is understandable why South Korea and other countries are opposed to the idea. Despite South Korea’s request for Japan to ban the Rising Sun flag, the Japanese government has refused. According to CNN News, Tokyo 2020 (the organizing committee of the Tokyo Olympics) has stated that the flag itself is not considered to be a political statement, so it is not viewed as a prohibited item. True, the flag may not be considered one in Japan. However, the crimes against humanity that this flag stands for internationally must be taken into consideration. In addition, South Korea’s Foreign Ministry spokesperson Kim In-Chul states that he “believes the Japanese government is well aware that the Rising Sun flag is viewed by neighboring nations as a symbol of (Japanese) imperialism and militarism.” So do I. If a teenage girl from the United States is aware of it, then there is absolutely no reason why the Japanese government itself should not be.

Numerous Japanese citizens and educated historians have stood up to the Japanese government’s efforts to deny the negative parts of Japanese history. They have tried to find records and evidence of Japan’s war crimes. However, much time has passed since the war crimes of Japan and every day there are fewer and fewer survivors who remember the crimes and the meaning of the flag.

The relationship between Japan and South Korea has reached an all-time-low since Japan’s annexation of Korea, starting from the trade spat last year. According to The Guardian, Japanese extremists have expressed hatred of Korea for a very long time. In an article from September 2019, they mocked survivors of sex slaves, calling them prostitutes who tried to make money from the sex industry. The anti-Japanese sentiment is similarly high in South Korea. Aya Yanagishima, a Japanese teacher living in Korea, says that when she says the word “Japan” to her students, they reply with things like “I hate Japan” or “your ancestors are trash.” According to the South China Morning Post, there are many cases where it is very difficult for Koreans and Japanese not to be biased toward each other in general. It seems logical that the South Korean government and citizens are the first to object to the use of the flag, especially during these tense times. An Min-suk, the chair of the parliamentary committee for sports, has stated, “a flag symbolizing war is not suitable for peaceful Olympic Games.” He further added that the flag is “akin to a symbol of the devil to Asians and Koreans, just how the swastika is a symbol of Nazis, which reminds Europeans of invasion and horror.”

The Rising Sun flag has been compared many times to the Confederate flag of America or the Nazi Swastika. It was officially declared the war flag of the Imperial Japanese Navy in the year 1870 and was used as a flag of war.

What seems nothing more than a red ball with sixteen rays holds an uglier meaning than it looks. By no means am I trying to undermine or insult the beautiful culture of Japan. I simply hope that by writing this article, I raise awareness of the meaning of the flag that will be used in the Olympic games. This symbol of cruelty and violence to so many people must not be used in an event that symbolizes peace.