Swiped Review: Why Do I Hate Myself? 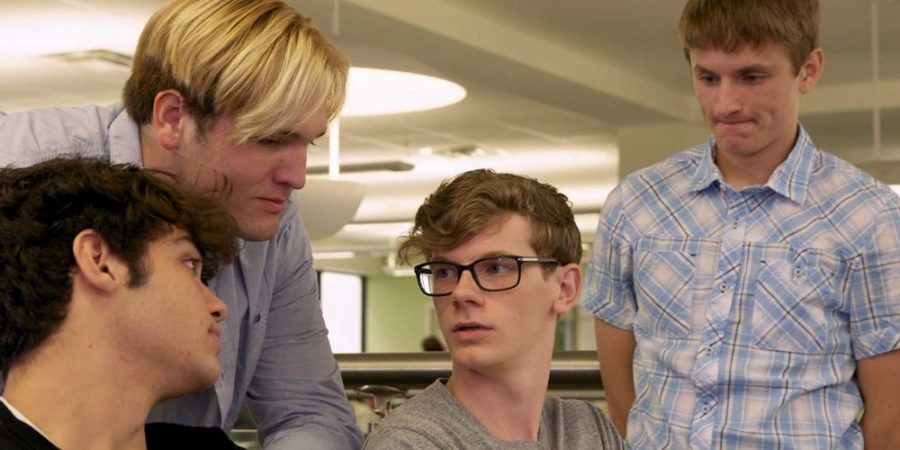 Still image from what might be the worst Netflix movie

Picture you’re a filmmaker. You make a movie, you like it well enough, then you release the film. But then, you find out that the film receives bad reviews. What do you do? Do you: a.) pick up your head and look towards the future, b.) hunt down each individual reviewer and claim that the film is just satire, or c.) just accept that you’ve made a terrible film and move on. If you chose b, then you must be director/writer Ann Deborah Fishman. I’m not kidding. She has put copyright strikes on every YouTuber and streamer who writes a negative review of her film. And every time anyone said he or she didn’t like the film, she claimed that that person didn’t understand the film’s message at all and that the film was satire. The way this can be described is from a quote from the famously critical director, Jordan Vogt Roberts, who once said, “Satire is not bankruptcy, you cannot just declare it.”

Swiped follows James (Kendall Ryan Sanders), a tech guy who has the brains for MIT and Harvard but can’t get in. He arrives at a lower level college to see his roommate Lance (Noah Centineo), who cares about nothing but getting girls and hangs with a posse who have one thing set in mind: They don’t want to know any girl’s name and they don’t want them knowing their name, all they want is to hook up with them and leave. They come up with the idea to make an app that is only meant for hookups. The app has three rules: You can’t say your name, you can’t see each other afterwards, and you can’t have any relationship afterwards. The reason for the latter rule is never properly explained. This starts to become a problem when James’s mother (Leigh-Allyn Baker) uses the app.

One thing that I can say to start is that the film has terrible writing. I’m actually trying to write and direct a film right now, but I am terrified at the thought that the script I wrote might be as horrible as this one. Seriously, exposition is just shoved in your face like being pied by a clown. I didn’t know that good exposition existed after watching this awful film. Then I watched well written shows like Fleabag and Homeland, which reminded me that exposition can be given in many easy ways without disregarding subtlety. But subtlety doesn’t exist in this movie. Absolutely nothing is subtle in the slightest. As part of Fishman’s “satirical purposes” to exaggerate events, she ends up making the dialogue so unrealistic that this film could only work for a person who has never met another person before. The reason I say this is because it feels so obvious that they are not real people. All I kept thinking about was that there’s no way anyone would go up to you and talk the way the characters in this movie do. The writer/director keeps trying to say that it’s for “satirical purposes,” but even if it’s trying to be so, it doesn’t even sound like they’d be in that normal satirical world. Also, she doesn’t seem to know how guys talk to each other. This I can understand completely. I mean, male writers often struggle to portray female characters in an accurate way. Somehow, though, the director’s depiction of casual conversation is worse for the female characters. I highly doubt that the way women talk in this movie is the way that women talk in the real world. So, in other words, every gender is portrayed horribly in this film.

The acting is also terrible too. Every actor except Leigh-Allyn Baker did a poor job. She notably played the mother from the Disney channel show Good Luck Charlie. As a child, I hated that show, but she was always the best part about it. She was the only good actor in this film and I hate the fact that they dragged her into it. Everyone else was horrible. Even though the script is terrible, the actors don’t give any effort at all. Kendall Ryan Sanders did an okay job, but most of the time he showed no emotion. Noah Centineo plays his role like he didn’t care about the movie at all. The acting of Lance’s posse made me roll my eyes. For example, in one scene, James talks about some apps he coded and they react in the fakest possible way. There are literally people who are reviewing this film that say the lines better than these “professional” actors. They repeat the lines to show how dumb they are and inadvertently deliver them better.

This film keeps claiming that it’s a satire on social networking, but it was not. If they’re going to say that the bad writing is there because it’s exaggeration, then that can’t be true. That’s just bad writing, and I still don’t get the point of the movie. And before I can be harassed by the director of the film, it’s not because I didn’t understand it from watching it in the movie, it’s because you don’t really show it. I had my eyes glued to my phone just to see the “message” the film was trying to convey, and I knew it but I didn’t see it. And this wasn’t some situation where the message is hidden. It was clear what they were trying to say, but they didn’t say it right. Are they trying to say, freak out when your mom tries to be happy? Women learn nothing even after the “message” is received? Even if you lie to a bunch of women about doing the coding for a dating app that they all hate, the one you truly want will love you forever when she learns the truth? If that message really is true in the real world, that’s incredibly hopeful. The thing is, it makes absolutely no sense. There is no message to this movie. It also is funny that this film thinks it has a message because it resembles another movie that thought it had a message too. They’re actually two movies called Birdemic: Shock and Terror and Birdemic 2: The Resurrection. They thought they were giving a message on global warming, but they didn’t even make it clear and both just ended up coming across as terrible. What’s also funny is that both Swiped and Birdemic are distributed by the exact same studio.

Also, the score of this movie is awful. Aside from the director, the composer is the only one really defending this movie. I can’t forget to criticize this awful score because it’s just incessant cheesy Disney Channel music. It keeps on repeating and it plays when it shouldn’t be played. It’s not consistent and feels like a bunch of loop tracks that were randomly selected. It sounds like a minor downside but this goes on for the whole film. You can’t run away from this awful score that will probably force flashbacks of this movie in your head if you ever hear it played after watching it.

So, this film is terrible. It wants to think it’s some masterpiece and that it’s a satire that can change the world. It might even think that it’s Jojo Rabbit, an awesome movie that definitely shows that this film does not know anything about satire. Jojo Rabbit is funny, important, and presents an amazing message for our world today. This film wanted to be funny, it wanted to be important, and it thought that it had a good message. The message of how women are objectified on social media seems to be what they thought they were going with, which is incredibly important, but this film doesn’t demonstrate that. In fact, women seemed to be objectified even more in this movie, but without a hint of satire. Even towards the end, women are portrayed as stereotypes even when they apparently “learned” not to be stereotypes. So this film really isn’t for anyone. Please don’t waste your time with this film. I have watched both Cats and Swiped in the span of a month, and I don’t know what I’m doing. Don’t make the poor decisions I’ve made.