Why Is Draco Malfoy Trending on TikTok? 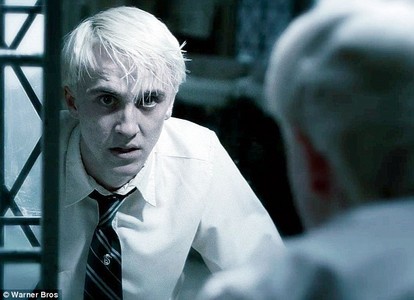 If you spend an average of six hours a day on TikTok like I do, you are probably aware of the most recent trend on social media: the Harry Potter character Draco Malfoy. Whether it’s a clip of him daintily blowing paper airplanes into the air or crunching into his apple, every single scroll on TikTok lands me further and further into the special hashtag called #DracoTok, and I doubt I can escape it anytime soon. This intense frenzy has even reached the ears of the actor who played Draco Malfoy himself: Tom Felton.

If you haven’t been active on TikTok, you might be unaware of how much Draco Malfoy is influencing the app— along with the hearts of teenage girls like Hannah Joung, a fellow junior and an avid lover of Draco. That is why I have asked her the fundamental question: why do you find Draco Malfoy attractive?

“I find him attractive because of his mannerisms, vibe, and image,” Joung (’22) said. “It’s more than just his physical appearance. Yes, he’s hot, but he’s not your typical hot guy in the movies! He’s, like, a side character that you wouldn’t expect to be attractive, which makes him even more attractive. He just gives off a different vibe than other characters who are supposed to be evidently good looking. Also, the fact that he was broken and tried to be a good person also makes him even more attractive. And I think that it’s more gratifying for someone like Draco to like you because he’s a Slytherin (a Hogwarts house) and Slytherin members don’t respect a lot of people, so if he ends up liking you, then it just makes you feel really, really special.”

She later added that she is, in fact, able to talk about Draco all day without stopping.

What’s interesting about this recent trend is that it’s exactly that:  a new obsession at its peak, despite the fact that the Harry Potter film series came out almost two decades ago. Yes, teenage girls seem to agree that Draco Malfoy is a blond bombshell. And, obviously, I’m not old enough to know what was trending in the early 2000s. But why now?

This is where Joung’s brilliant contributions come into use again. When I asked her why, after all this time, Draco is loved, this was her answer:

“I think his trend is in 2020 because Gen Z (this teenage generation) is desperate and we have nothing to do during COVID-19, so we’re just revisiting parts of our childhoods. Harry Potter is one of these parts, and we’re seeing the characters from a more mature and big-picture point of view. And now we tend to empathize with and sexualize Draco Malfoy.”

I have to admit, I personally see the appeal. I really do. There is rather a limit to the number of hours a stressed teenage girl can spend on #DracoTok without forming some kind of attraction to the allure of the bad boy character. (I can’t believe I’m writing about this.) But before I further contemplate whether or not to make my best friend’s fictional crush my phone wallpaper, I would like to include my third and last question I’ve asked her: what is your favorite part about Draco?

Joung graciously provided me with two answers: the first, his “rough and rude mannerisms,” and second, his hands.

“His hands are so hot,” she soon added.

(Personally, I myself prefer his eyes.)

And that is the answer to the question, “Why is Draco Malfoy trending on TikTok?” Go take a look at #DracoTok. You won’t be disappointed.