The Devil All the Time: Watched for Cast, Stayed for Everything Else 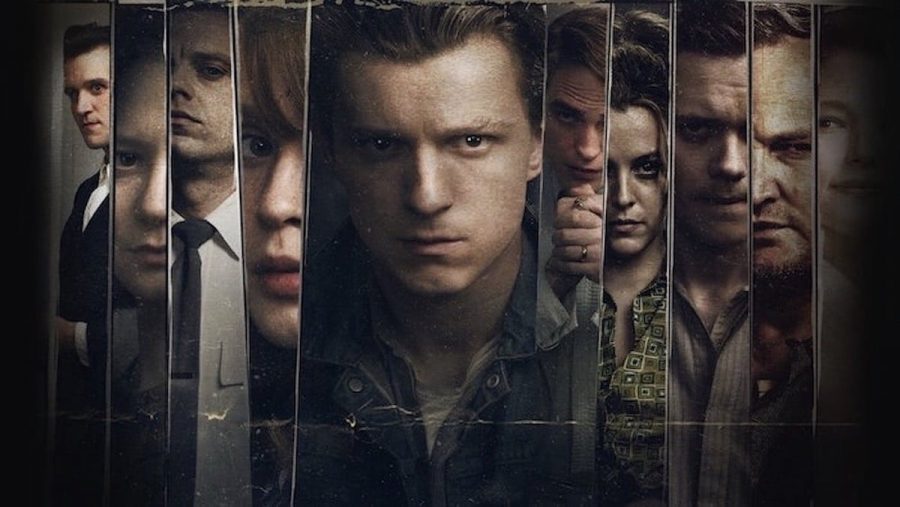 Although The Devil All the Time’s cast is comprised of heartthrobs of many teenage girls’ fandoms, I can’t say that it would be every girl’s dream. There are no vampires and superheroes who rescue the love of their lives and save the day in this one. In fact, a light-hearted story is far from what Campos’ recent work makes it out to be.

The audience follows a young man, Arvin Russell (Tom Holland), in the Midwest from the end of World War II to the early ’60s, who can be placed as the center point of everything and everyone in the film. There are 10 “main/major” characters in total and their paths interchangeably and intricately cross (most notably with Arvin). Arvin’s father, Willard Russell (Bill Skarsgård), a returning WWII veteran, settles in Knockemstiff, Ohio with Charlotte Russell (Haley Bennett). A religious bunch of Helen Laferty (Mia Wasikowska) and her family, Lenora (Eliza Scanlen) and Roy Laferty (Harry Melling) reside in Coal River, West Virginia with Willard’s mother/Arvin’s grandmother. Meanwhile, Sandy (Riley Keough) and Carl Henderson (Jason Clarke) are a homicidal traveling couple of “photographers.” (I greatly emphasize traveling and homicidal, so you’re welcome to guess what you’re in for). Arvin also encounters Reverend Preston Teagarden (Robert Pattinson) and Sheriff Lee Bodecker (Sebastian Stan) who are not the most honorable in their professions. Arvin’s life is difficult, to say the least. Although there are a great number of characters in the film, many don’t stay in the movie for too long.

Brutal scenes that are violent mark the Gothic film, but violent as they are extremely short. They are then followed by a seemingly upbeat song in the following scene as if to mask what just occurred, making up the all-around dark tone and content of The Devil All the Time. But the overall theme remains the same: evil lurks everywhere, especially in the face and name of Christianity. Religion is a key aspect of the movie which acts as a downfall for many of the characters and their humanity.  Roy Laferty, a preacher, and Reverend Preston Teagarden are fervent and charismatic in their sermons. Melling’s ardor in Roy Laferty didn’t surprise me too much as I recognized a similar intensity from his work in The Ballad of Buster Scruggs. Pattinson however did intrigue me as he spat out words of God in a deep, exaggerated Southern accent (which he developed on his own without a dialect coach) and proceeded to convincingly disturb me with his portrayal of an unholy clergyman; he proved just how extensive his range could be.

I could also say the same for Holland with his depiction of Arvin.; forget the friendly neighbor Spider-Man image we’re all so used to. Arvin is personally acquainted with trauma and knows the world as a hostile place, something I can’t blame him for. The way Arvin speaks, a hardened Southern accent, reflects a fair amount of pain he must’ve endured and had to attune to from all the events we witness.

What Campos chose to do with Devil that sets it apart from other books to film adaptations is he has the author of the original, Donald Ray Pollock, narrate the procession of the story (or “stories” if you don’t want to link all the events to Arvin). The narration allows the film to keep the elements of a novel: the reasonings/thoughts of characters, directly stated foretellings, and such outside information that readers would be able to gather but not the watchers. With its simplicity of setting and dialogue being simultaneously heavily dramatic, I can definitely see the content of Devil being featured as a theatrical play. I hope I get to see Pollock’s tale on stage one day if it ever gets adapted. Again.