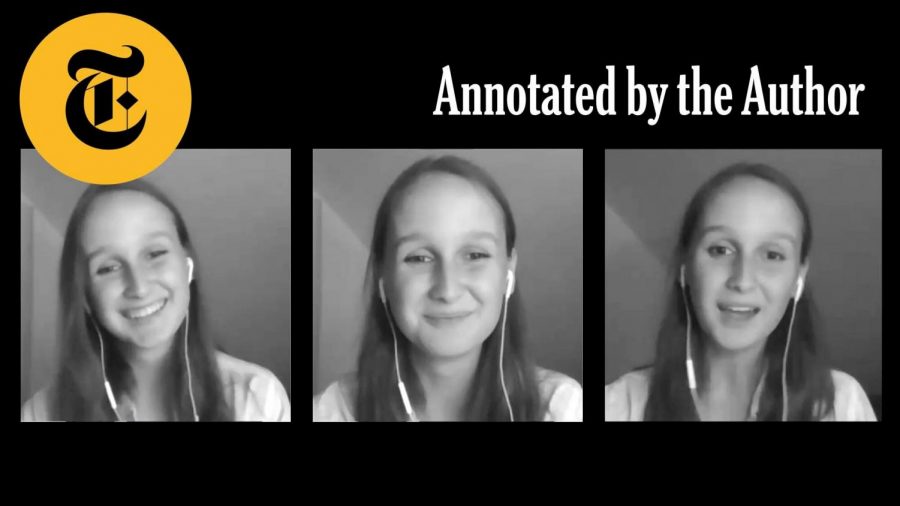 On October 14th, 2020, The New York Times announced that Varya Kluev (’20) was selected as a winner of its 2019 Personal Narrative Contest for her essay “Pants on Fire.”

Kluev’s essay was one of the eight winners of the second annual contest, which received over 8,000 entries from teenagers all around the world. In her piece, she describes the enjoyment her fourth-grade self felt when she lied to make her life sound more interesting to others. Kluev was also interviewed for The New York Times’ “Annotated by the Author” feature, part of their “Mentor Texts” column. The feature, hosted by The Learning Network, allowed Kluev to annotate her piece so readers could understand her writing process and how the story came to be.

Kluev described her experience in brainstorming ideas for her story: “I remember sifting through lists of possible prompts and not seeing anything that caught my attention. I knew I wanted to be frank, but all the ideas I had at first I knew I was going to have to embellish a great deal to make interesting.” It was from there that she realized the perfect topic to write about that would make her writing most authentic. “I remember telling myself, don’t do that, that’s not very honest,” she said. “And then it hit me: Lying! Perfect! I think the topic is a nice blend of personal experience and a relatable growth that others could understand and empathize with.”

Once she had come up with the topic to write about, it took a while to get her thoughts onto paper and organize them in the most eloquent way. “I’m a slow writer, so for once, I was responsible and started working on my piece a few weeks before the deadline,” Kluev said. “I would revise it every few days or so until I was perfectly happy with it. I think the first time I sat down, I spent a few hours writing out the skeleton, the backbone of what I wanted to say. The rest of the days I polished and perfected, which took many more hours…I had a 25-page doc with all the previous drafts I couldn’t bear to delete.” Once she had submitted her piece and found out she had won the contest, she was invigorated by the joyous news. “I was over the moon! I was exhausted that day too, so getting the email with the link to the published piece was a better energizer than an espresso shot.”

Some advice she would give her fellow students and prospective writers would be: “Just do it! I feel like a lot of people don’t think it’s worth their time, convincing themselves that they have no chance anyway. You never know until you try. Plus, writing is fun, so don’t view it as some sort of chore. Write freely, honestly, and run a spell-checker at the end—you’ll do great.”

She credits all of her teachers who greatly influenced her writing technique and helped her develop a unique style. According to Ms. Malanka, who instructed Kluev in AP English Language and Composition last year, although she introduced the contest to Kluev, Kluev was the one who took the initiative to register for the competition. She said that Kluev had always been as “diligent, creative, and generous” a student as she was as a writer, and would often seek “thoughtful criticism” for her writing. Kluev, according to Malanka, always wanted to know what people had to say about her writing.

Kluev is never afraid to speak freely and tell things as they are, and it was this genuineness and thoughtful insight that caught the attention of The Times. Kluev wouldn’t have known what she was capable of if she hadn’t stepped forward and written for an audience, and both she and Mrs. Malanka advise any prospective writers to just try because, as Mrs. Malanka said, “even if you aren’t recognized, the chance that your writing could possibly resonate with a reader should be enough to motivate you.”