Biden and a Divided Democratic Party 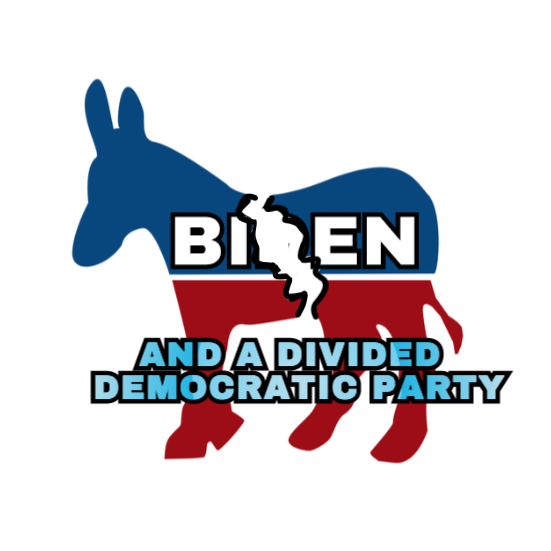 A freshman year Jonathan Tenenbaum sits in his weekly New York Times Club meeting. He rummages through his lunchbox: leftover empanadas, maybe a juice box, probably a bag of chips or snack his mom bought at H-Mart. His stomach rumbles. After the club president reads The Morning Newsletter, the floor opens for discussion. This meeting’s conversation inevitably drifts towards President Trump and his mind-boggling 2016 victory, the world of politically-active youngsters seemingly still recovering a year later, trying to make sense of it all. An unnamed upperclassmen then embarks upon an impassioned rant proclaiming the need for a more extreme and, in his eyes, thus inherently more exciting candidate, This is what it would take for the Democrats to win, or so he said. Munching cautiously on a lukewarm empanada, then a fledgling political enthusiast, emboldened by my first debate victory a week prior, I offered a mild rebuttal. I didn’t and still don’t believe far-left progressive policy is what it takes for Democrats to win an election for better or for worse, but rather a candidate who can win over centrists in swing states. The upperclassman swiftly shuts me down, pointing to Hillary’s loss as proof. Today, still joyously recovering from Biden’s victory and vicariously celebrating in the streets of New York City through Snapchat videos and TikToks, I offer to the unnamed upperclassman a polite, “I told you so.”

Amidst the surge of excitement and relief in the news of Biden’s election there exists an undeniably important discourse taking place, a power struggle between Democratic progressives and moderates. Less than 48 hours after the closing of the polls on Tuesday, the Democratic members of Congress joined for a fiery conference call in which many of the centrist candidates who lost to or eked out narrow victories against opposing Republicans tore into progressive members of their party like Alexandria Ocasio-Cortez. They blamed her among others for associating the party’s brand and image with calls to defund the police and socialist ideas like Medicare for All, which threatens an end to private insurance. They argue that these ideals associate moderate democrats with extreme reforms that may win elections and excite voters in heavily liberal areas like AOC’s 14th congressional district of New York but fall short as they fail to win over and may even scare away centrists, undecided voters, and independents. Republican manipulation of this association can be seen in the aggressive advertising campaigns led by Republican candidates for Congress across the country, playing off the recent social unrest and socialist ideals endorsed by Democratic progressives.

On the call, in audio published by The Washington Post, Abigail Spanberger, a first-term congresswoman from Virginia who won re-election by a single point margin, attacked fellow Democrats and colleagues.

Spanberger said, “If we are classifying Tuesday as a success from a congressional standpoint, we will get f****ing torn apart in 2022.”

This power struggle has only become more hotly debated and public since, Alexandria Ocasio-Cortez taking to Twitter Friday to condemn the “folks running around on TV blaming progressivism for Dem underperformance,” arguing that an “awful execution on digital” was to blame for the losses of centrist Democrats.

“[She] doesn’t understand that Queens isn’t anything like exurban Richmond,” Bennet said, “Fundamentally, the Democratic brand is not all that strong outside of areas that are very blue. Voters look at [moderate House Democrats], they look at who is running for the statehouse and they see Bernie Sanders or AOC or Nancy Pelosi.”

On the contrary, progressive activists point to Obama’s being labeled as a Marxist extremist by Republicans despite pursuing relatively centrist liberal politics. Many also note the centrist Spanberger herself being attacked as a socialist in 2018 by Republicans. This, they argue, did not prevent the two politician’s victories.

While I don’t feel blaming progressives and further dividing the now-presidentially empowered Democratic party is the right solution, I do agree with Bennett’s sentiment. I recognize how frightening or off-putting extreme Democratic reform can be to a centrist or on-the-fence voter even if by mere association through party allegiance. Regardless of what Alexandria Ocasio-Cortez, and like-minded Democratic congresswomen Ayanna Pressley, of Massachusetts, Ilhan Omar, of Minnesota, and Rashida Tlaib, of Michigan, may argue about the appeal and necessity of proposed progressive reforms, this last election has served as true proof that to win, Democrats must win over centrists in swing states and districts. Championing and extolling the need for progressive reform is simply not the way to win elections, whether or not these reforms merit implementation aside.

Rahm Emanuel, former mayor of Chicago and White House chief of staff under President Barack Obama, said, “The progressives said we need a base candidate. No, we didn’t. We needed someone to get swing voters. If you campaign appropriately, you can make that a governing transformation.”

Not to mention, I feel the emboldened divisiveness among Democrats, between progressives and moderates, is immensely counterproductive. I have seen in recent days progressive politicians not only shrug off blame for centrist Democrat losses but, perhaps inadvertently, stoke the flames for further hostility within the Democratic political spectrum.

For example, Corbin Trent, Ocasio-Cortez’s former press secretary, said, “I hope the truce, to the extent there was one, is over, and I hope we start firing on all cylinders and firing shots across the bow… [Centrist Democrats] are as much our enemy.”

This simply should not be the outlook among Democrats, regardless of anyone’s firm belief in more liberal, progressive reforms as the remedy to America’s social, economic, and political issues. The election result shows that a sizable portion of the American population finds themselves unready or unmoved by the drastic Democratic reform gaining support in cities like New York, Boston, and San Francisco. As a left-leaning centrist, who considers himself open to new political perspectives, I know what it feels like for one belief system or political allegiance to feel universal in the predominantly Democratic town of Tenafly. Just as Tenafly is far from representative of the entire United States politically, progressives seeing notable victories after campaigning off of socialist reform in highly liberal districts should not consider these victories or voter response to this campaign strategy in these liberal areas as applicable to the national scene. To have the chance of proposing or introducing progressive reform, Democrats need to win elections and, with the recent presidential election as evidence, that likely entails a more moderate approach or campaign strategy. Not all of these Americans, uncertain of progressive reform, can be simply written off as racists or nay-sayers. These voters should not be dismissed or disregarded as they are by some who believe strongly in divisive progressive reform. Their votes determine our elections.

Joe Biden has insisted time and time again, a sentiment I admire, that “It’s time to put away the harsh rhetoric, lower the temperature, see each other again, listen to each other again.”

Biden recognizes that his journey as President begins with an attempt to heal or soften the deep divide among Americans, and this definitely includes bridging divides and lowering hostility within his own political party. Don’t get me wrong, I would never argue in favor of Democratic ideological homogeneity, in fact, I admire how dynamic and diverse America’s political parties are, but, I hope for the sake of Biden’s presidency and the future of Democratic performance in elections, that differences between moderates and progressives can be resolved respectfully and the crucial conversations regarding the association of progressive reforms with the brand of the entire Democratic party can take place and be seriously considered.

One thing is for certain– a perfect storm is brewing for turmoil within the Democratic party, and as Larry Sabato of the University of Virginia Center for Politics warns, “One of Biden’s real difficulties is going to be keeping the left and center from battling with one another constantly.”