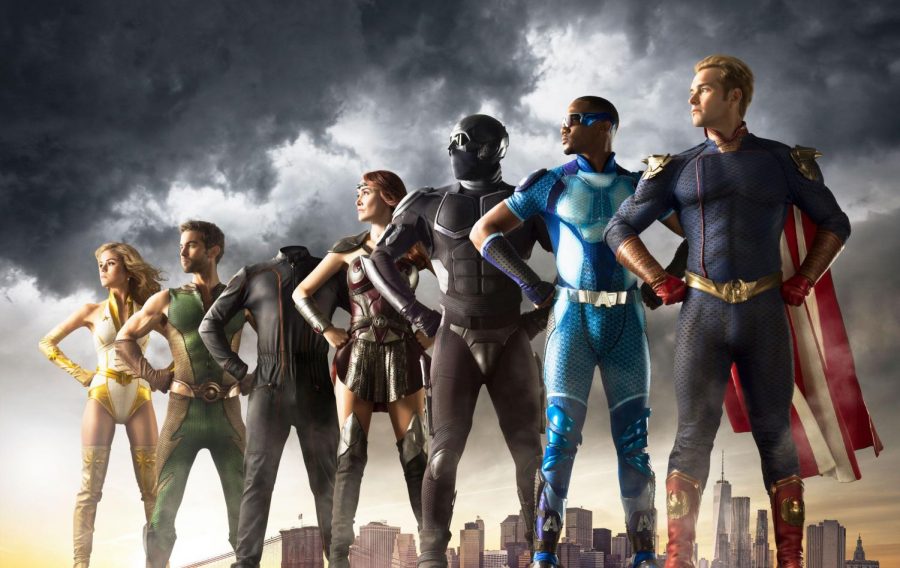 I have truly found a show that I can’t properly describe. Never have I seen a show that managed to drop my jaw in shock at nearly everything. It’s edgy but it’s been able to take home the honor of IMDB’s #1 show of the year and a 97% rating on Rotten Tomatoes. From the stuff they get away with to the amount of shock level this show reaches, every second of the show is absolutely ballistic.

The Boys takes place in a world where superheroes exist. Leading all petty heroes and other supes (the show’s term for superhumans) is the proud and massively popular team, The Seven. They consist of supes Homelander (Anthony Starr), Queen Maeve (Dominique McElligott), A-Train (Jessie T. Usher), The Deep (Chace Crawford), Translucent (Alex Hassell), bright newcomer Starlight (Erin Moriarty), and, easily my favorite of the bunch, Black Noir (Nathan Mitchell). In the show’s take on the modern world, supes are hailed as world-famous saints. One day, superhero fanatic Hughie Campbell (Jack Quaid) walks outside with his longtime girlfriend and witnesses her get brutally killed as Seven member A-Train runs straight through her. On the news the next day, A-Train issues a public apology stating his regret for accidentally killing someone who walked in the middle of the street and makes up fake claims that he was trying to stop before hitting her, but this comes as a shock to Hughie who knew she was  a foot off the curb. The management company Vought (the company that runs The Seven) leaves him nothing but a $40,000 check in exchange for signing an NDA to never discuss what happened. As Hughie is unsure of what to do, he is approached by the very chaotic Billy Butcher (Karl Urban) who brings Hughie to The Boys, his gang of four people, including arms dealer Frenchie (Tomer Capon), tough but also soft ally Mother’s Milk (Laz Alonso—and, yes, Mother’s Milk is his birth given name in the show), and the violent supe, The Female (Karen Fukuhara). Together, they aim to take down the entirely corrupt Vought and The Seven.

I was already excited to watch this show, but I truly was not prepared for the amount of satire and deep meaning behind it. Despite this being a superhero show, it does a phenomenal job tackling issues like the #MeToo movement, white supremacy, systemic racism, and corporate responsibility. Each issue was represented properly unlike other shows that treat bringing up these issues like checking off a checklist. The Boys treats the issues with care, subtly and perfectly incorporating them into the episodes, which for a show like The Boys is hard to pull off. It is also genuinely funny. It pushes both boundaries and expectations, which lead to some wildly humorous and shocking moments that last throughout the ride.

Another huge highlight is the knockout performances in the show. I may have had trouble listing all the characters and actors, but they all deserve to be mentioned because they are all incredible. They range from wildly narcissistic, to incredibly villainous, and charming. Karen Fukahara and Karl Urban do a wonderful job transforming into characters that are quite different from themselves. Yes, that is what acting is, but they do so well, changing from having bubbly and charismatic personalities to having dark, gritty, and foul personalities. However, the best of the large bunch, is Anthony Starr. There could have never been a more perfect actor to play Homelander as he goes the extra mile to shape him into one of television’s greatest villains. I can usually predict when an actor is faking an American accent, but he had me completely fooled.

I think it is quite significant that The Boys keeps you attached to everyone in the show. With a show as wild as this, you would assume it would be difficult to care for every character. Homelander is one of the most evil characters to ever be put to film, and yet I still want to keep on watching his fiery reign of terror on the world. Even every friendship or relationship has your keen attention.

So I would definitely recommend this to anyone. It’s great to binge watch alone or watch it with close friends or family. However, one fair warning: maybe don’t watch it with someone who’s not in love with superhero shows or nonstop chaos, like my mom (for those reasons, she wasn’t having as great a time as me and my dad). Regardless, it’s a fun watch with many meaningful messages that I’m sure will appeal to a broad audience.