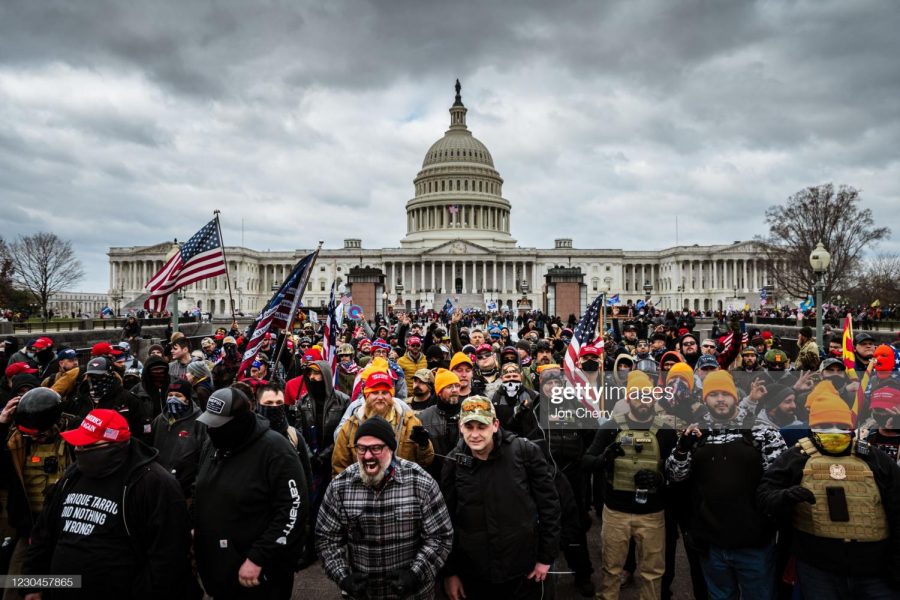 On the day of Georgia’s runoff election, a large group of Trump supporters gathered on the streets of Washington DC to protest the results of the election. What started out as an angry cry for a change in the presidential election results quickly escalated into a violent riot as “protestors” stormed into the US Capitol Building with the goal of allowing Donald Trump to remain in power instead of President Joe Biden. The event seemed to have been pre-planned in some form and encouraged by Former President Trump, who had been expressing his doubts about the election results and requested several recounts: “This is a major fraud on our nation…we will win this, and as far as I’m concerned, we have already won it” (BBC News).  He continuously encouraged his supporters to object to Joe Biden’s win by any means possible.

Former President Trump had been holding a rally at the White House on Wednesday before the storming, and many of the perpetrators had convened at the rally before heading to the Capitol. A large mob amassed in front of the Capitol, chanting “USA” (among other things).

The insurgents climbed the walls of the building and rushed up the steps before penetrating into the interior. The protest rapidly became violent as rioters began to break the windows, resist against police officers, take down American flags, and even detonate explosives.

Members of Congress and other present staff were rapidly escorted to the House gallery, where they were instructed to duck and hide under or within the seats. Security of the building was limited, and police were outnumbered by the unrelenting crowd. Many protesters were able to get inside the lawmakers’ offices and even get a hold of government property. Since then, many of them have been identified, charged, and arrested.

As of January 12th, there have been five confirmed deaths and several injuries. Among the rioters, according to TheNew York Times, were Ashli Babbitt, who was shot by a police officer while climbing through a window; Kevin Greeson, who suffered a heart attack and fell on the sidewalk outside the Capitol; Rosanne Boyland, who is said to have collapsed in the Rotunda, and Benjamin Philips, whose cause of death remains unclear. Additionally, the risk of COVID-19 can never be ignored. Most of the attendees at the Capitol were not wearing masks and did not appear to be social distancing. Recently, New Jersey Representative Bonnie Watson Coleman (D) tested positive on January 11th. According to NBC New York, she believes she was infected by other House members not wearing masks during the riot on January 6.  She is among other Congress members who recently tested positive after being closely sheltered during the riot. Surely, many more cases are to come as a result of this superspreader event.

Amidst the chaos, Former President Trump was urged to stop his supporters. According to CNN, he conveyed a message through Twitter, asking “I know your pain…we had an election stolen from us…but you have to go home now. We have to have peace.” However, due to misleading information Trump had tweeted recently and on the day of the riot, Twitter suspended his account and deleted several of his tweets. As of today, his account has been permanently disabled on Twitter. According to Axios, the former-president has also being suspended and censored on Reddit, Twitch, Shopify, Google, Youtube, Facebook, Instagram, Snapchat, and TikTok, among other platforms.

However, the short video was not enough to convince the insurgents to cease. Officials implored Trump to summon the Washington DC National Guard to stop the violence. Although the President and his administration claim that he immediately deployed the National Guard, there is still a lot of controversy as to who called them and when Former-Vice President Mike Pence was also directly involved with the Pentagon and took more of an initiative, according to CNN and NBC. There was a large delay in the arrival of the defensive forces, and the Capitol spent several hours with limited, under armed staff.

The United States has now endured an unprecedented coup against a national hallmark of unity and stability, all amidst a worldwide pandemic. 2020 may be in the past, but if this tragedy is any indicator of what 2021 has to bring, this year is going to be utterly unbearable. Now, there is only one thing all Americans can agree on: the Capitol needs better security.