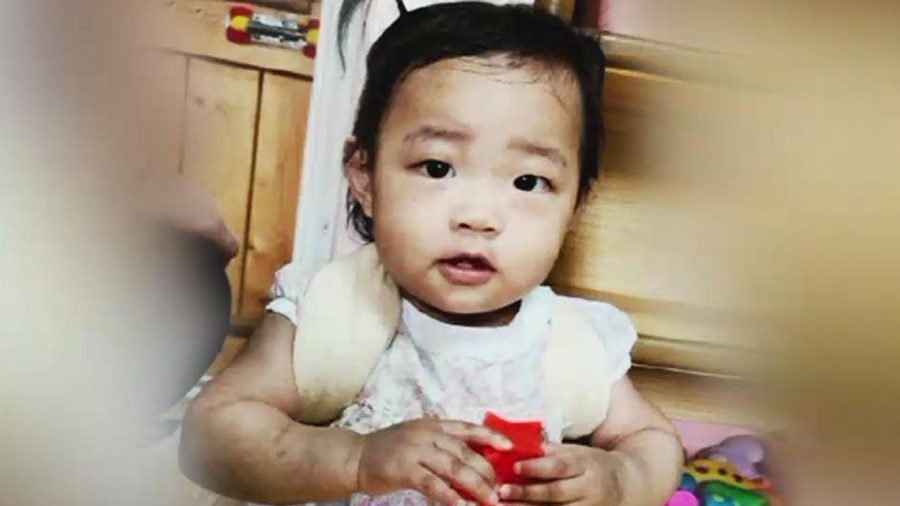 Jung-in's picture after she had been adopted by Jang and Ahn.

Content warning: The article entails descriptions of violence that may not be suitable for readers.

Jung-in, a 16-month-old baby, died after suffering brutal abuse from her adoptive parents for ten months. The autopsy revealed that her cause of death was “damages to the abdomen by an external force.” She died at the Ewha University Mokdong Hospital in Seoul, Korea on October 13th without getting much attention from the media. Now, the news has reached millions across the globe, with many celebrities highlighting her story.

The parents who adopted her go by Jang and Ahn, and had adopted Jung-in when she was seven months old. At the time of adoption, they already had a biologically related older daughter who was raised with care, compassion, and love. Before the death of Jung-in, the family was seen as a “perfect family,” especially when they appeared on the show, One Average Family. Yet, this turned out to be a hypocritical facade when in fact,  behind the scenes, they were functioning as the opposite of a perfect family.

On January 2nd, Unanswered Questions, a popular Korean documentary show, finally exposed the reality of the parents and the brutality of Jung-in’s abuse after her death. In its latest episode, doctors unveiled the severity of the situation: she was abused to the point where her organs ruptured and her pancreas was cut. As an experiment, the show demonstrated that the force needed to cause this was the equivalent of, or even greater than, the force of a full-grown woman jumping off from the couch to land directly on the baby’s stomach. “When Jung-in was admitted with a cardiac arrest, we were able to regain her consciousness for a brief period of time. We grabbed these CTs at that point… When I saw the results, it made my blood boil,” said Professor Namkoong Ihn, a medical professional in the ER at the hospital of Jung-in’s death. From analyzing Jung-in’s X-ray scans, he had discovered several old fractures among new ones, and he did not hesitate to characterize it as  “a blatant case of child abuse that could well be included in textbooks.”

Additionally, the police uncovered security camera videos of the adoptive mom pushing the stroller that Jung-in was sitting in against a wall, and some witnesses claim that they saw the adoptive mom turning the stroller upside down with Jung-in still in there. Police also discovered about 800 videos on Jang’s phone of Jung-in being abused. Although Jung-in’s parents have claimed that the crime they committed was unintentional and that it was a mistake, this absolutely enraged the Korean public and the media as well.

For about a week, the top trending search terms in South Korea were related to either Jung-in or Jung-in’s parents. On top of that, hundreds of thousands of people signed petitions seeking for change and harsher sentences to be made. As of now, the South Korean citizens are incensed by this issue. Not only are Jung-in’s parents the subjects of their anger, but so are the police officers who neglected the issue.

While Jung-in’s daycare teacher tried to warn the police about the abuse multiple times, authorities neglected the issue. In fact, the police reportedly disregarded the case report three times in the span of four months. According to the police, Jung-in’s situation could not be classified as child abuse unless there was an open wound or fracture. On May 25th, when staff members at the daycare first filed a claim for the bruise, they were ignored. Again, on June 29th, a witness reported to the police that a baby, whom we now know to be Jung-in, was in the car alone during hot weather. The report was again ignored. Finally, on September 23rd, when the daycare teachers brought Jung-in to the hospital themselves, the doctor filled in the police report saying that “it had to be [child abuse].” Jung-in often went to the daycare center with bruises in various places of her body, so the teacher had even confronted her father about the issue, but he claimed it was the result of a massage.

On January 6th, the South Korean Police Chief apologized for the case, as police investigations only began after her passing. Many celebrities including K-pop artists, actors, and singers, the Internet have expressed their anger about this case through the hashtag #JunginImsorry, which has gone viral recently with about 95K posts after its first use in January, especially through the platforms of prominent Korean celebrities such as Park Jimin from BTS and other actors and singers.

Child abuse laws in Korea can be interpreted in different ways. Parents who abuse their children normally end up in prison for a maximum of fifteen years. But this case is much more severe than the average case and has raised more awareness about child abuse laws in Korea than those before. Not only has the president spoken about this particular case, but so have many politicians in South Korea about reforming the system. On January 13th, the first trial was held, and the court changed the charge for the parents so that they are classified as murderers, not child abusers.

The Seoul Metropolitan Police Agency also released a statement that the eleven officers involved in her case before her death have all faced consequences. However, when people discovered that the penalties they received did not threaten their position as officers in the slightest, they were outraged. Jung-in’s unfortunate passing serves as an important reminder for all of us—that child abuse is a serious issue that should not be neglected or tolerated anywhere in the world, regardless of law or culture.