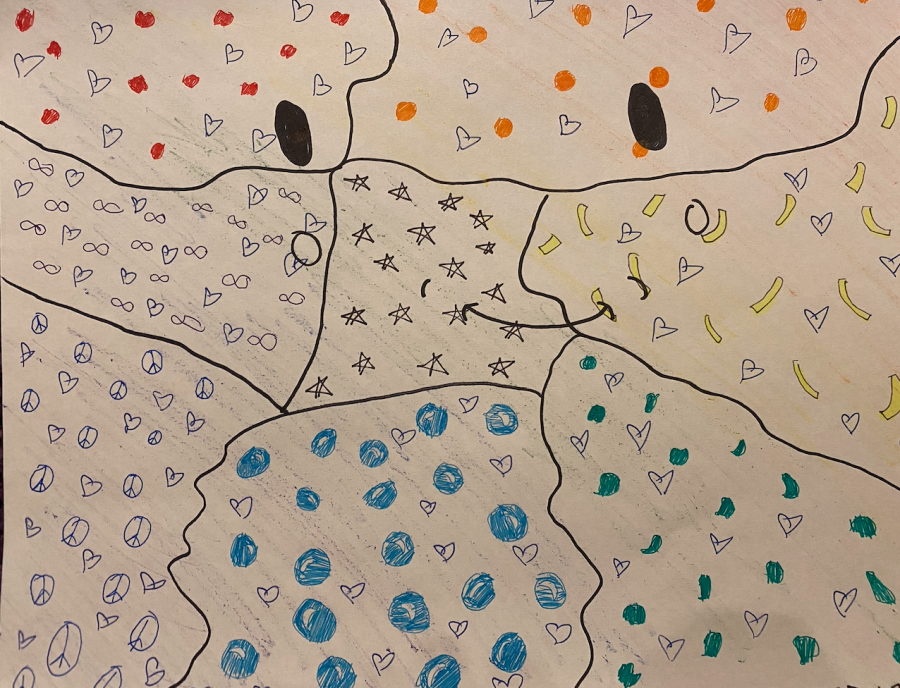 The colorful smiley face that I drew in my room at 11:30pm.

Every teenager’s worst fear: No connection. No wifi. No internet.

This year alone found, according to TV Insider, that Netflix users take in around 2.3 hours of entertainment per day. A 2018 study found that 44% of US teenagers use their phones all the time, which is almost double the 24% of teens who said they do in 2014. Twenty-five percent 25% of teenagers say that they are unable to prevent themselves from answering a text, according to Bit Guardian blog. This addiction causes 11 teenagers to die daily due to phone-related car crashes. Excessive phone use has also been linked to decreased focus, headaches, anxiety, and even depression, with social media acting as a big contributor to the latter effects.

As someone who frequently has a cell phone screen time of around 7 hours a day, I wanted to put my addiction to the test. At 5:30 pm, on a Friday evening, I turned off my phone and my computer and placed them in a box in my closet that was not to be opened until 5:30 pm the next evening. And, on top of that, I decided not to tell any of my friends about it. I thought that if I told them I wasn’t going to be using my phone, then I wouldn’t be missing out on anything, and the challenge would be pointless. Could I do it? My mom wasn’t so sure. But, I had faith in myself. This is how those 24 hours went:

DISCLAIMER: No Snapchat streaks were lost in the making of this challenge. I simply changed the time that I usually send them. Sorry for the inconvenience.

Hour 1: I think this is the longest I’ve gone without at least glancing at my phone in years. I kept grabbing handfuls of air. What to do…What to do…oh! I got it. I’ll read. Let’s try 30 pages for now.

Hour 3: I finish the page I’m on and I realize that I’ve finished the book. How did I do that? I have the attention span of a fly. Attempts to read a mere 15 pages for school have sometimes taken hours before. Without the anxiety of wondering if I’m missing a text or snap, I found that my focus greatly improved.

Hour 4: Dinner without Netflix. Now, I’m not a huge Netflix person (mainly because I’m often too busy to sit down and get into a show), but weeknight dinners are my 45-minute reprieve from schoolwork, and I like to enjoy these breaks with some light-hearted television. Perhaps an episode of Jane the Virgin, or maybe the season finale of Bridgerton. Without my computer, there wasn’t much else to do except eat with my family. We talked about our days. It was truly a wild time.

Hour 5: I started a new book: The Book of Unknown Americans by Cristina Henríquez. I read 70 pages before the first time I put it down.

Hour 6: I walked around my room. I observed each item as if I was coming home to my childhood room for the first time in years, and in a way, I was. The things in my room were just that to me, things. I realized I’ve never actually really noticed them before, and began to wonder why as I reminisced on the stories and experiences that are perpetually attached to each one. Then it hit me: the amount of time that I was spending in the digital world had blocked me from seeing the physical world. The influx of information that I was constantly experiencing from my phone sped up my world so much that I could not process what was right in front of me. I picked up an orange Muji gel pen and examined the clear plastic that surrounded it. I was brought back to the 5th night of Hanukkah two years prior. My mom came home from the mall with a bag containing small notebooks and gel pens. The notebooks have since completed their life and have been laid to rest in the crevices of my closet, but I thought that I could give the gel pens a new life. Following the theme of nostalgia, I decided to color. I grabbed a single sheet of printer paper and got to work. Now, I’m no artist, and my creation was nothing more than random splotches of ink forming a smiley face, but I found the activity oddly peaceful. I was there. I was genuinely there. Twitter was not teleporting me into the abysses of past scandals. Buzzfeed was not there to inform me of the music dropping the next day. I was simply in my room at 11:30 p.m., with coloring supplies spread out along my desk where my computer used to be. And I was happy.

Hour 7: Now for the hardest part: falling asleep. Question: How the hell was I supposed to enter a state of unconsciousness without scrolling through TikTok for at least an hour? Answer: Faster.

Hour 18: My father began his day by opening my door and asking me if I’d like to go to the zoo. Normally, this would anger me on two accounts. 1. He woke me up and 2. Um no…why would I want to go to the zoo? Guess where we were 45 minutes later.

Hour 19: The zoo was almost a flop, on account of my favorite animal (A tiny Goeldi’s monkey) being blocked off due to the snow. However, the prairie dogs more than made up for it.

Hour 20: As we left the zoo, I began thinking of ways to occupy myself for the remaining four hours. Legos came to mind. Both my brother and I went through some intense Lego phases, each of us outgrowing them before middle school began. Nonetheless, I dragged my parents to the nearest Barnes & Noble. I walked out with a used copy of The Arabian Nights as well as a Lego Central Perk set.

Hours 25-28: Upon getting my phone back, I used it non-stop for about 15 minutes. But after I responded to all my texts and got caught up on the latest celebrity news, I put it down. Not only did I understand that my phone did not have to be such a huge part of my life, but I did not want it to be. I was significantly more alert, productive, focused, and less anxious than I normally am. Unfortunately, technology usage has been significantly heightened due to the COVID-19 pandemic and I likely won’t have the opportunity to spend that much time away from electronics in the near future. Even when schools are back in person, we will be using our devices in the classroom more than ever.

Before completing the challenge, I was 100% certain that it was impossible for anyone in my generation to function for an entire day without a cell phone. I hope my story can serve as a reminder that life does not exist on a screen. While technology has incredible benefits and has linked people all around the world, connectivity is not meant to be incessant. Some days, you just need to sit in your room, pull out your gel pens, and color a poorly executed smiley face.