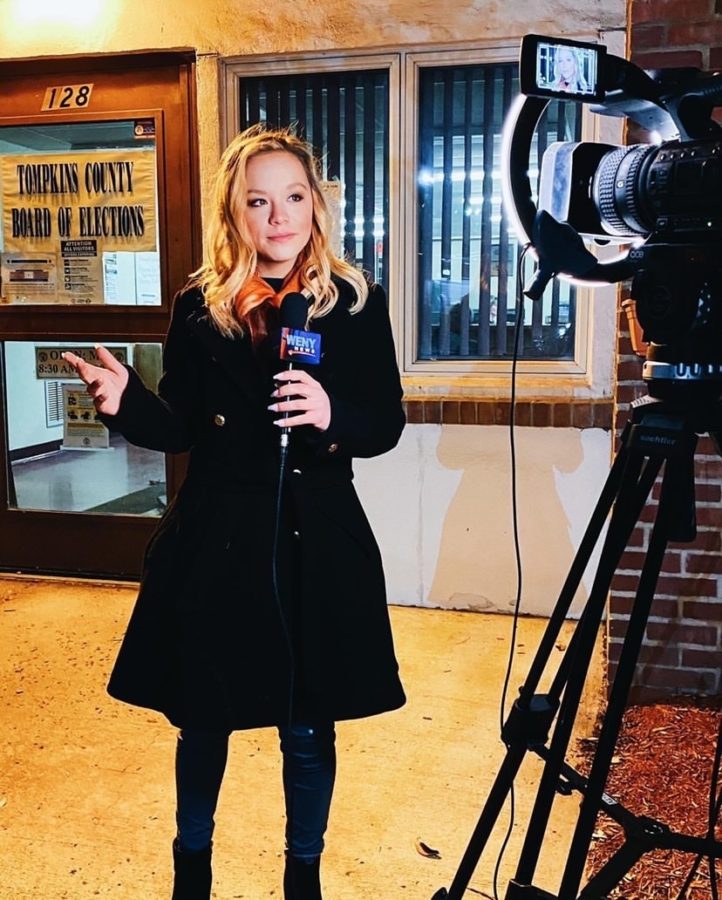 While reading The Echo, do you ever wonder where Tenafly’s brilliant writers are headed? Many of them might solely enjoy writing as a hobby, while others strive to pursue it in their future endeavors. Tenafly High School alumna Sarah Horbacewicz advanced beyond reporting for THS TV and being staff writer, news editor, managing editor, and editor-in-chief of The Echo, graduating from Ithaca College with a degree in Television-Radio. After landing a job at WENY News, she currently serves as a multimedia journalist, anchor, and producer at the station.

Horbacewicz has made every effort to become a journalist since her young Stillman School ages. In fifth grade, she was overwhelmed with excitement when she was provided with the opportunity to report for TIME for Kids, and has pursued journalism ever since. “My very first interview was with Justin Bieber,” Horbacewicz said. “On that same day, I interviewed Will Ferell [and] Jordin Sparks.” She was further amazed by reading her own article in the magazine for the first time. Her fanatical experiences as a TIME for Kids reporter ultimately amplified her passion for journalism as she continued to seize each journalism-related opportunity in her years to come.

During her time at Tenafly High School, Horbacewicz tackled various roles from her freshman year onwards including anchoring for THS TV, handling the morning announcements, and writing, managing, and being editor-in-chief of The Echo. Horbacewicz highly recommends the roles she took on throughout high school for aspiring journalists. “Even if you want to be less on the management side and more writing or more video, it was an incredible learning experience for me,” Horbacewicz said. “You get leadership skills and you learn how to work with others—people your own age, people older than you.” As editor-in-chief under the advisorship of Mrs. Maloney, she learned how to effectively manage a team and see the entire perspective of situations, something she deems worthwhile.

When entering the workforce, many journalists make the decision to gear their career towards a specific branch of journalism. Horbacewicz has always wanted to work in television as she takes great pleasure in working in a studio and control room with her colleagues. “I like the visual aspect that comes with the stories,” Horbacewicz said. Instead of merely telling the public her stories, she integrates the visual sights and sounds. She enjoys “piecing it all together like a puzzle.”

Furthermore, Horbacewicz has always loved conversing with others and telling stories, which is her favorite aspect of journalism. “I love getting to know community members, and really digging deep,” she said. “Having people trust you with their story—I think that is something really cool.” In pursuit of discovering more about her community in Ithaca, New York, Horbacewicz conducted a podcast, conveying how the whole world is connected by no more than six social connections. Called Six Degrees Between Us All, the series began with Horbacewicz calling and interviewing a random number from a phone book. Succeeding each interview, she asked her interviewee who she should interview next; as a result, she proved the theory of six degrees of separation.

Horbacewicz entered each interview unknowing of her interviewee’s life. “The less I knew, the better,” she said. “I viewed it as a challenge for myself as a journalist to try and figure out how to piece together a story from an hour phone-call with a stranger that I had no basis for.”

As a journalist, Horbacewicz stresses the importance of having an open mind. “Be willing to do anything and it’ll build on that,” she said. In the past, Horbacewicz has worked on tasks that were not always directly related to what she was ultimately pursuing. During her sophomore year of college, she attended the 2018 Winter Olympics in Korea as an intern for NBC News. While some of her days consisted of mundane activities, she spent other days on The Today Show set with Olympic athletes. “It’s a good stepping stone to get you where you want to go and get you that next opportunity.”

Throughout the week, Horbacewicz continues to report, conducting live interviews, developing packages, and covering a wide range of stories. On the weekends, she also anchors and produces a one-hour show, Good Morning Twin Tiers Weekend.

It’s exciting to imagine where Horbacewicz will go in her career in journalism, but for now students can find inspiration by checking out Tenafly’s very own alumna, Sarah Horbacewicz, working journalist, on WENY News.