Mochi Donuts…Are They Worth It? 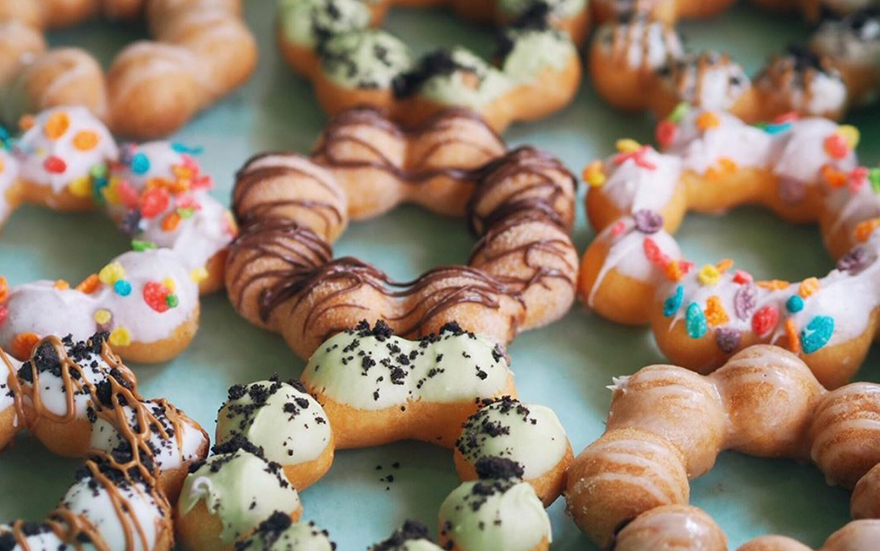 Before I begin my official review for mochi donuts, I would like to state that I have a deep dislike of donuts. I find them way too sweet and otherwise tasteless, and I would never spend my own money on any sort of donut. Why am I mentioning this? To emphasize how delicious mochi donuts are.

What are mochi donuts?

They are essentially a mix of classic American donuts and Japanese mochi, originating in Hawaii and Japan. It was mostly popularized in Japan under the name “Pon de Ring” from the donut chain Mister Donut. Hawaii, due to its large Japanese-American population and its proximity to Japan, tends to catch onto Japanese trends earlier than the rest of the United States. In Honolulu in 1992, a girl named Charmaine Ocasek started making poi mochi in her parents’ garage. What she made was a fusion of Japanese and American deep-fried mashed taro and rice cake. Meanwhile, the Japanese Pon de Ring, which first made an appearance in 2003, was made of tapioca flour, boba, and pudding fame. What makes them chewy is rice flour, and each is made as a ring of eight dough balls. There are many variations available, from flavors as classic as strawberry to as unique as black sesame.

I first discovered what mochi donuts were on TikTok, and I believe that they’re a pretty new trend. When I finally bought some and opened my box containing six mochi donuts, I was pleasantly surprised. Each with colorful rings, unique shapes, and different toppings, it was an aesthetically pleasing sight. When I finally took a bite out of one, I knew I was going to devour the entire box. I would describe them as chewy, but not too sticky. Some flavors, like Oreo or green tea, were mildly sweet, but others like yuzu or blueberry were very intense. It was nice because there were so many flavors available.

What was a bit disappointing, though, was that it seemed as though all the different “flavors” are simply the toppings on top; the donuts are all the same. So after you finish the topping, all that is left is the same-tasting donut. Also, they go stiff relatively quickly. I bought them in the afternoon, and by the evening they were already considerably stiffer than before. I had to throw them out the next morning. I suggest that if you want to eat the entire thing by yourself (like me), don’t get the six-pack one.

The price of these mochi donuts also bothered me a bit. I’m sure prices vary, but I believe they’re all around fifteen to twenty dollars, which really isn’t cheap for six donuts that taste the same except for their toppings.

Overall, although I was more than satisfied with my purchase, I wouldn’t necessarily buy it again. I’d say that it was a great one-time opportunity to experience something trendy, and I definitely recommend trying it out!