After We Collided Review: Make This Stop Please 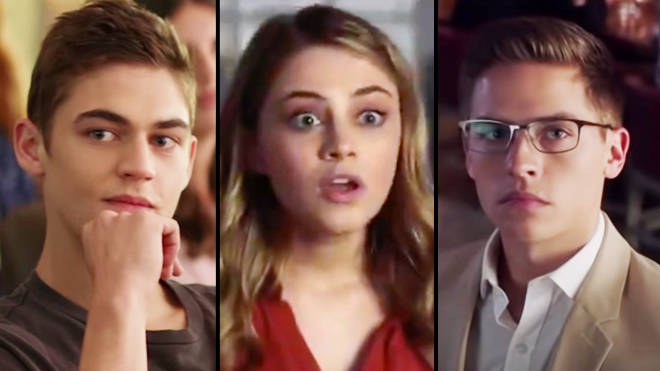 Still image of the main trio of this wretched film.

Well, here we go again. It’s time to watch Fifty Shades of Grey for teens part two. I’ve been putting this off for a while because I hated the first movie, and as I expected, this one was even worse (which is saying a lot) However, there were some changes from the first movie. In the swap of some features of the first movie, After We Collided switched out having characters basically admitting toxic relationships in exchange for just subtly toxic ones. However, Tessa and Hardin’s  relationship is no longer worse than the one in Midsommar. It’s to the point where Grace and Daniel in Ready or Not (Grace is hunted to be a sacrifice in a ritual at the hands of Daniel and his family) have a better relationship.

After We Collided follows Hardin (Hero Fiennes Tiffin) and Tessa (Joesephine Langsford) living their lives right after the ending of the After was retconned (they didn’t think they were getting a sequel so they made it seem like a sequel was not necessary). Tessa gets a paid internship at a publishing company that is either way too rich or way too stupid and generous with what they give. She makes herself at home and is then sent to a work conference, which confused me because it was only her second day. She then is brought to a night club for free because she’s with the company (which I guess excuses the fact that she’s still either 18 or 19 years old). Then after she gets drunk (which is encouraged by her employees and a shady business man that they have to get on their side) and goes up to her room. Meanwhile,  Hardin is having a rough time. He is stuck at a party with friends who he no longer likes and the worst written villain in movie history, Molly (Inanna Sarkis). He receives a phone call from Tessa, drunk as could be, and he runs to make sure no one takes advantage of her. Since he had already put a tracker on her phone (this is way too casually brought up in the movie), he races to see Tessa. Then after he races there to make sure no one hurts or takes advantage of her, he takes advantage of her (where’s Cassandra from Promising Young Woman when you need her?).

This film was absolutely messy. Although poorly written, there’s a new feature of the writing: everything works out for the two of them. Not like “Oh my gosh, the stars have aligned for our love,” no. Everything that happens unreasonably works out for them. Tessa starts her first day off by reading 3 transcripts at her publishing company and her boss approves one of them and because of this, he offers her a deal that amounts to about 491,000 dollars (I did the math) in moving to a new state and tuition. And that’s only off of being a paid intern. Everything continues to work out for them, but worst of all is that the writing is all over the place. Every character is completely inconsistent throughout the run, nothing truly has consequences, and everything is all over the place. It just feels like stuff happens but they really mean nothing.

With the addition of an decent director, despite the fact that the only credibility to his name is Cruel Intentions and Furry Vengeance, the acting is able to distract from the absolutely awful lines but it isn’t enough to carry several aspects of the movie. The characters are so inconsistent with the previous movie. The acting is not bad, but it doesn’t help that some of the actors act like they were making four movies with four different movie scripts and each character was different. Hardin literally was a mix of Christian Grey, 90s sitcom husband, Harry Styles, and Connor McGregor. I have no clue what this guy is now. Also, you don’t know Tessa’s character no matter what. Her character is pretty much, “I’m different ’cause I like books.” That’s literally all there is to her character.

Also I have to dedicate one whole paragraph to the horribly stupid character of Molly. I guess she’s supposed to be the antagonist of the film, but I don’t think I’ve seen a mean character written as worse as her. It’s like if the writers of Riverdale came together just to write an introduction for her because her exposition is so blatant it hurts. It actually makes me cringe so hard that it hurts. I didn’t think I would hate a character so much and not in the way it was intended. Take Dolores Umbridge from Harry Potter for example. I’m pretty sure everyone who’s ever read Harry Potter can agree that she is such a hateful character. However, I have to admit that she is so good at making me hate a character so much. However this wasn’t the case for Molly in After We Collided. Instead of hating her because she’s good at being so evil, I hate her because she is just such an annoying character. Her first line is literally forced and painful exposition. Then her character proceeds to do whatever is needed to foreword the nonexistent plot and makes me want to throw my computer out of the house. There are at least 20 Disney Channel bullies that are more thoroughly developed than she is.

Another thing that annoyed me was that they dwell over what happened in the first movie so much and at the same time, they never talk about it. They’re always saying “I can’t forgive you for what you’ve done.” They’re talking about Hardin making a bet that he could make Tessa fall in love with him (which still makes no sense) and they treat it so weirdly by never directly mentioning it. There isn’t any line of dialogue that mentions how Hardin manipulated her or how Tessa. This would’ve made sense rather than just an hour and 45 minutes of “HOW COULD YOU HAVE DONE THIS TO ME?!”

More than half the movie is reminiscing over the first and trying to make you feel sad that they’re broken up. I did not know what to feel. I mean, they didn’t exactly make their romance emotionally investing, so why should it matter that they’ve broken up. They keep trying to say to the audience, “Cry, it’s definitely sad,” but I feel nothing. I literally feel nothing. Their relationship is still severely flawed and this time around when Tessa is offered a possible love interest named Trevor (Dylan Sprouse). She’s literally given the chance for a relationship where she’s not doing everything and she also doesn’t need to get drunk to actually be happy. Also, I mentioned it earlier but Hardin takes advantage of Tessa when she’s drunk. Then for some screwed up reason, she’s constantly told by Hardin, “You clearly felt something for me last night and you still miss me.” The writers literally make it so that the point where Tessa realizes that she misses her ex is when she is taken advantage of by him. Tessa also keeps going back to him because Hardin’s mom constantly says, “He’s better with you.” That is not a healthy message for kids because even though this is 50 Shades of Grey for teens, it’s still rated R. The problem isn’t that it’s rated R, the problem is that the R rating is an excuse used to drill so many horrible messages in girl’s brains. The lessons say you’ll be happy once you’re blackout drunk, a toxic and slightly abusive relationship is acceptable if there’s a reason, your job will pay for your entire life, and no matter what you don’t have to try hard to get far in life because everything will be taken care of for you.

This is a horrible movie and the entire “franchise” itself is even more horrible, but we have to acknowledge that as a society we’ve made this a 350 million dollar franchise. Sure, it might’ve been okay to read Anna Todd’s original fanfiction on Wattpad, but it was not okay to make the book an international bestseller and let it turn into a movie. Then we decided to make that movie a success. So why did we let this happen. Why did we as a society allow this to be successful. Now because of this, we’re getting two more of these stupid slobs. It’s horrible, but we’re telling Anna Todd this is great. So I have one final plea. We as a society, can allow the next film to be a complete box office bomb. Back in 2016, the second sequel in the Divergent franchise, Allegiant,  was released, and it came to be a complete box office bomb. This killed the plans for the final film and it stopped the planned TV show from getting the green light. We can make this happen to After. There are two more sequels planned which I doubt we truly want but maybe deserve. But together, we can make After We Fell a box office bomb. So when the film releases when things are normal, just see something else. Let us all kill this horrible film series and let the nightmare stop.