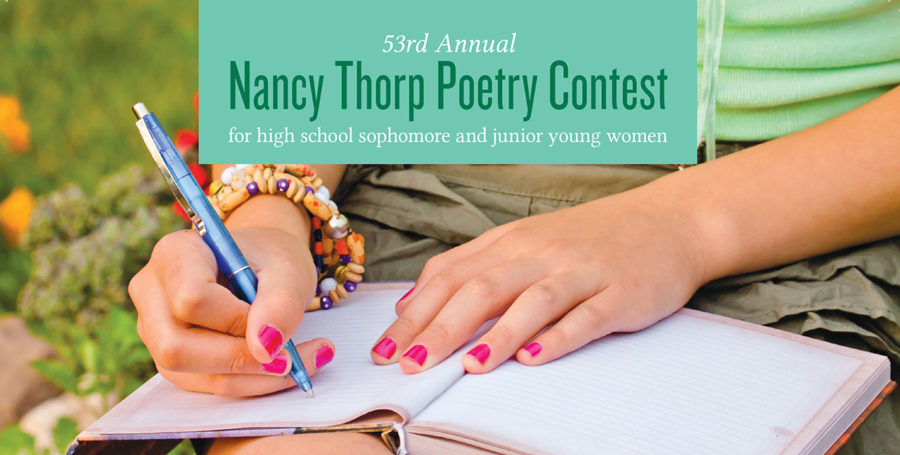 Rebecca Beaver’  poem “Girls of Steel, Girls of War” was chosen as one of 89 Honorable Mention poems out of over 965 entries in the 57th annual Nancy Thorp Poetry Contest, an international poetry competition for young women in high school. sponsored by Hollins University in Roanoke, Virginia.

Because the Nancy Thorp Poetry Contest encourages its applicants to write about issues surrounding women and feminism, Beaver said that, in her poem, she wanted to express the inner strength that women often need to possess in order to succeed in a world dominated by men.

When asked about the source of inspiration for her piece, Beaver said that “although normally, I gather inspiration for my writing from nearly everything that happens around me, no matter how trivial it may appear to others,” this time was a bit different. For “Girls of Steel, Girls of War,” she drew her inspirations from two main sources. “The first was my introduction to the Girls of Steel all-female robotics team at Carnegie Mellon University, which I learned about extensively when I did a virtual tour of the school in late fall of 2020,” Beaver said. “The second was my older cousin, who is currently serving in the United States Army, and what I observed from her struggle to assert herself and excel in such a male-dominated environment.” She explained the poem’s central metaphor:  “This poem was intended to allow the reader to understand my view of the world as a young woman: as a battlefield on which I am constantly engaged in a conflict to prove myself and assert my competence.”

Writing, especially poetry, has been important to Beaver for many years. For her, writing is a way to express herself and to have a “release” when everything around her just becomes too much. “I write best when I am at my emotional antipodes. Writing to me serves as a therapeutic as much as it acts as a social and political platform for self-expression. I never feel more liberated than when I have a pen in my hand,” she said. She expressed how writing helps alleviate stress caused by school and other activities. “I take nearly all of my free time to write and read. I set aside time each day to do both, and I often find myself between classes or on the weekends working on a piece of writing or revising and editing a first draft.”

Girls of Steel, Girls of War

This world, never let me be gentle this cruel sunken world

Can only birth girls
With muskets for mouths

Midnight armour for my narrowed eyes– My contradictory eyes

Off my blood red face
Of beauty and baleful battle cries.

We are girls of steel, made for war.

The Nancy Thorp Poetry Contest will run again next year, and sophomore and junior young women are encouraged to submit.