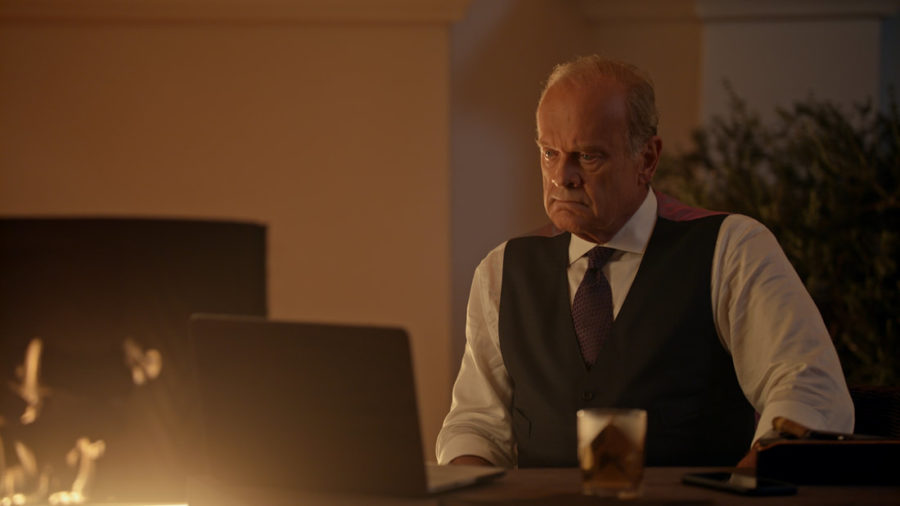 Still image of Darius "the rumble" Grouch the third who must be called by his full name.

I have seen several low budget movies over the years, but Money Plane might be the film that really expresses just how low its budget is. With a budget of $5 million, you can’t help but wonder: where did the money go? There are studios that give filmmakers only $4 million to work with, but the camera quality still looks pretty phenomenal. Money Plane, on the other hand, is exactly what would happen if I got my phone and tried to make a movie when I was in middle school. So, let’s dive into the wild world of Money Plane.

Money Plane follows Jack Reese (Adam Copeland) as he and his team fail to rob a painting for the mob boss they serve known as Darius “the Rumble” Grouch III (Kelsey Grammer). As the Rumble mentions how upset he is about not having his painting five different times, he informs Jack of a way to be done for good. He gives Jack and his team the task of robbing an airborne illegal casino known as the Money Plane (hey, look, they said the title!). The Money Plane has over $1 billion in cryptocurrency and a safe filled with a lot of money aboard and the Money Plane is the house for any kind of bet that anyone can think of. He brings his butt-kicking fighter Isabella (Katrina Norman) along on board to collect the money, and there’s definitely nothing sexist about the way she fights. Also along the ride on the Money Plane is his ground control guy Trey (Patrick Lamont, Jr.), who goes under the hidden alias Mr. Mcgillicuddy (it’s okay to laugh, the name is massively stupid). The three rush to be free and escape with their lives on the dangerous Money Plane.

This film is beyond ridiculous. It feels like it was written by four middle schoolers who don’t understand how the world works, but it was written by four thirty-year-old men who don’t understand how the world works. I don’t know if it’s the acting or the script, but even natural things in the film feel so off. Shouting, “WHAT IS THIS?” became a motif while watching the entire movie. This is helped by the large amount of plot holes in the film. Why would they make a shady casino for the sky when it’s a lot easier and cheaper to choose a underground area in Vegas? Why is cryptocurrency a physical entity in this world? Why do characters forget that planes have copilots? And why do they even go through the trouble of slowly getting the money from the plane when it’s in an easy-to-open safe and they’re going to jump out of the plane anyway? This film is just so confusing.

Speaking of confusion, let’s talk about the bets; also known as the reason the criminals are using a plane as a casino. The first lead in we get to the bets is just as confusing as the rest. At first it starts off with betting on how long a man can survive after getting bitten by a cobra which, considering the idea of illegal and violent bets, makes sense here. Then apparently they’re betting on a guy who gets his arm cut off. But what were they betting on; what was the bet?  Then Mr. Mcgillicuddy goes to the bathroom and comes back without making any bets to win a very specific time stamp for a guy getting attacked by piranhas. Once again, context is needed because what was the bet on the piranha attack? And also they keep telling Mr. Mcgillicuddy, “you’re on a roll man”. How could anyone even get excited about these bets? Maybe if they were more clearer I’d see why these sociopathic violent criminals enjoy this but it just seems so forced and unclear that I can’t understand it. We also never see anything like the cobra or a shot of the piranhas because they couldn’t afford that kind of thing in a movie.

I will say that I might be too harsh on this movie. I say this because it’s the best movie to make fun of with your friends; so, that’s what I did. We all put on masks and proceeded to give this film loud commentary. We didn’t even care about the plot or even the action. We just yelled at the TV and went nuts every time they said, “money plane.” So, if for some reason you read my review and decide you want to see this movie, do it with friends. It turns a confusing movie into an actually good and entertaining viewing experience.

So, what is there to say about this film? Is it ridiculous, yes. Is it not well thought out, yes. Is it an entertaining experience if you just gather some people to yell at a TV? You know it. It’s every studio’s D material, but it’s entertaining to make fun of. It’s not like Cats, through which you suffer endlessly in a horrifying travesty, but it’s pretty good ironic movie viewing.