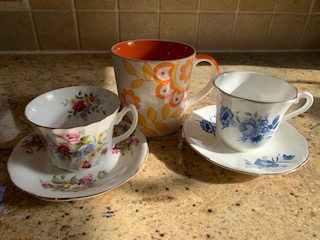 Have you ever taken notice of the short, white mugs that sit on the desks of teachers? Filled with either a deep shade of cocoa or pale cinnamon, it is inevitable that the teachers at THS take pride in their morning cups of joe. In a pique of curiosity, I interviewed some THS teachers about how they drink their coffee and why they drink it this way, and their unexpectedly diverse answers intrigued me….

Mr. Morrison enjoys a simple cup of black coffee. He candidly expresses, “Over time [I] found that needing milk or flavoring or sugar took too much effort.” Although bearing the demanding job of principal at Tenafly High School, Mr. Morrison seems to be a man of simplicity, in search of the quickest route to prepare his morning cup.

Although Ms. Capone typically does not enjoy sweets, she does adore the sweetness of her morning coffee. She prefers her coffee decaffeinated, but with flavored cream to preserve her coffee’s sweet flavor. Before work, she will pour three cups into her canister and sip her brew throughout the day. Before lunch, she will often make an additional cup. When asked, Ms. Capone expressed that she prefers Starbucks coffee over Dunkin’ coffee, but loves all coffee nonetheless.

Mr. Hiler carefully brews his own coffee every morning using a manual method. He describes, “First, I boil water and pour it over a cone-shaped ceramic coffee maker. If I’m only having one cup, I can place the ceramic coffee maker directly over the cup. If I go big and have 2 cups, the coffeemaker empties into a carafe [a glass container].” Although having received judgment, Mr. Hiler enjoys his coffee-making process as he believes it tastes best: “I’ve been called a weirdo by doing it manually instead of using an electric coffee maker but… whatever! It tastes great!”

Inspired by his parents, who were avid coffee drinkers, Mr.Whitehead’s adoration for coffee began at sixteen. Four years later, his quest to find the best way of coffee making began: “I tried percolation, French press, and an espresso machine. All those methods had problems. Then, my sister told me about the Chemex method.” Mr. Whitehead has been using the Chemex since his first trial in 1992, as he describes it to be precise, hands-on, clean, and—for him—ritualistic.

Wondering how to make coffee using the Chemex method? See Mr.Whitehead’s instructions below:

First, the Chemex pot is basically an hourglass-shaped beaker (you can get a fancy, hand-blown one if you want) with a detachable wooden handle held in place with a leather thong tied in a knot. The handle allows you to hold the Chemex without burning your hand when it’s full of hot coffee.

Heat water in a kettle. I use a retro electric kettle by Russell Hobbs. I use only as much water as I’ll need so as to not leave water in the kettle to get stale.
Grind whole coffee beans. I prefer my coffee strong and black. I purchase dark, oily beans, usually from Fairway (Sulawesi or Santo Domingo), M. Rohr’s (Havana), or The Coffee Exchange (Guatemala French Roast). I use 1/3 of a cup of whole beans and grind them with a Capresso burr grinder while the water is heating to a boil.
After grinding the coffee, I dump it from the grinder hob into a Chemex filter inserted into the top of the pot (see attached web page).
After the water has boiled, I slowly pour the water in a thin stream over the ground coffee in a circular motion, and first let the coffee “bloom,” or foam and release its oils and flavors.
After it’s done dripping through the filter, I pour into a pre-warmed mug (I use hot water to warm the mug). To continue to keep the mug warm while I drink my coffee, I use an electric mug warmer on my office desk. It looks like a coaster, but it’s got a heating element under it.

Mr. Whitehead likes to stick with the Chemex method at home, but slightly alters his methods when traveling:

I use the same method at work or when traveling, but I don’t use a Chemex pot or whole beans. Instead, I use a Melitta single-cup pour-over brewer and ground coffee that I store in a Talenti container. It’s the same concept but compact and not breakable, and I don’t need to tote a grinder around. I use #2 filters for this method.

Mr. Whitehead reflects, “The coffee comes out delicious every time and there’s virtually no mess, no bitter dregs at the bottom of the cup. If anyone wants to try it, you can buy the Chemex pot, Chemex filters, and beans at M. Rohr’s in Dumont on Madison Avenue.”

Mr. Moreng: Iced Coffee with French Vanilla and Half and Half

Mrs. Oppedisano: Milk and No Sugar

Mrs. Oppedisano prefers her coffee with milk and no sugar: enough to motivate her productivity yet temper the bitter taste of caffeine. She explains, ”If I’m going to savor some coffee, I’ll happily try whatever peppermint-lavender-cinnamon-oat-milk monstrosity is written in cursive on some lovely cafe’s chalkboard,” but later admits, “at that point, it’s not really about the caffeine, is it?” Inspired by Mr. Whitehead, Mrs. Oppedisano uses the Chemex method at home (see above), but explains, “I don’t have the discipline to set it up properly while trying to fight the copy machines at school.”

As many of us may understand, Dr. Kennedy likes to stick to the basics: a regular cup of coffee, preferably a Dunkin’ original, with a splash of milk. He explains, “I don’t care for Starbucks or any wacko flavored sugary concoctions that pass themselves off as coffee.” Dr. Kennedy prefers the simple taste of caffeine, as he explains that “coffee should not taste like pumpkin pie.” He also prefers a hot coffee, particularly in a mug, saying that “coffee should be hot, not packed in ice… [and] enjoyed in a ceramic mug.”

Senora PM purchases whole bean coffee and grinds her coffee at home. If time permits, she will use a French Press or stovetop espresso maker, although she admits that this does not happen often. Sometimes, she will even sip her coffee in a proper china cup and saucer.

Mr. Hutchinson: Coffee with a Splash of Skim

Mr. Hutchinson switches his coffee habits seasonally: hot coffee in the colder seasons and iced coffee in the summer. He explains, “I don’t understand how people can drink it [coffee] iced in the middle of winter.” Mr. Hutchinson enjoys sweets, but not in his coffee: he drinks his coffee with no more than a splash of skim milk. He prefers dark roast, loves Starbucks, and enjoys taking part in the apparent “coffee club” in the Social Studies office of THS.

Ms. Eastwood: Depends on the Mood

Preferring no particular method of coffee brewing, Ms. Eastwood has both an espresso machine and a drip coffee machine at home. Her coffee preferences change along with her mood. She explains, “I drink it cold or hot, black or with cream as a latte, cafe au lait. It depends on the time of day and how I am feeling.”

Tune in for a Part Two coming soon!