President Zelensky: A Hero with a Unique Past 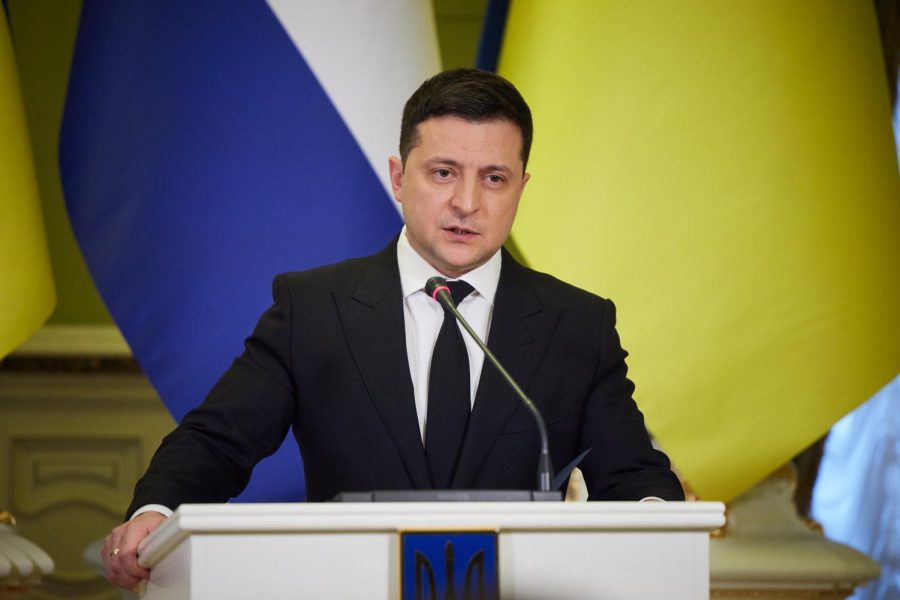 The Ukrainian President Volodymyr Zelensky stands behind the flag of Ukraine

As Russia continues its attack on Ukraine, all eyes are on Ukraine’s 44-year-old president, Volodymyr Zelensky. Despite the ongoing invasion, Zelensky has continued to give televised speeches to his people as well as to world leaders asking for their support and assistance in this fight. Due to these engagements, his political prowess has been the subject of many news segments and debates. However, his political publicity now has greatly overshadowed his background as a small Jewish comedian from Soviet Ukraine.

Volodymyr Oleksandrovych Zelensky was born in 1978 in Kryvyi Rih to Jewish parents. His grandfather, Semyon Zelensky, fought against the Germans in World War II. However, Semyon’s father and his three brothers were sadly killed by the Nazis. Zelensky spent his early years in Mongolia, where he became fluent in Ukrainian, Russian, and English. After high school, he joined KVN, otherwise known as The Club of Funny and Inventive, a team-based comedy show. He won the competition in 1997. His career with KVN then came to a close as his acting career began.

He joined the cast of Love in the Big City in 2008. The first installment in this trilogy follows Igor, played by Zelensky, and two of his friends as they journey to the “Big Apple” to start their lives. He received prominent roles in many other Ukrainian films such as Office Romance, Our Time, Rzhevsky vs. Napoleon, and 8 First Dates. Most notably, he is known for being the Ukrainian voice of the beloved red hat-wearing bear, Paddington.

Although Zelensky had no political experience prior to taking office, he did star on the Ukrainian television show Servant of the People, in which he plays a schoolteacher who winds up becoming president of Ukraine after a video of him denouncing the current government goes viral. In the past few weeks, broadcasting deals requesting authorization to air the series have skyrocketed. Although Zelensky has since become a successful real president, the world is not letting him forget his roots as a small actor.

To continue the list of his odd jobs, in 2006, Zelensky not only competed in, but also won, Ukraine’s version of Dancing with the Stars. In many of his dancing clips, he can be seen sporting extremely ostentatious clothing, such as a hot-pink suit and a black-and-white striped top hat.

After all of this talk about Zelensky’s past, it’s hard to imagine how someone like him could possibly want to run for president, let alone win. However, to fit the theme of the sheer randomness of his life, it all happened by accident. The production company that produced Servant of the People, Kvartal 95, decided to create a political party named after the hit TV show. Zelensky joined the party in order to place a trademark on it so that no one else could taint its name. Still, Zelensky had no plans to run for president; he was just an actor. However, a poll indicated that the people wanted him in office. He eventually gave in to public opinion and announced his plans to run in 2018.

His campaign was rather extraordinary. For starters, the majority of his campaign was run virtually. He also disclosed very little of his policies except that he wanted to run as a testament to the influence that an average citizen could have without the corruption of big-name political groups. He posted videos onto YouTube in order to garner a wider audience. He also performed stand-up comedy shows to emphasize the point that he was just an average guy. He won the 2019 Ukrainian election and has been in power ever since, illustrating the power of the common man.

Since the 2022 developments in the Russo-Ukrainian war, many more people have gradually become aware of Zelensky’s accomplishments, taking to social media to comment not just on his bravery and policies but also on his appearance. Twitter user Emma Salisbury tweeted, “BREAKING: every woman in your life now has at least a small crush on Volodymyr Zelenskyy and there’s absolutely nothing you can do about it.” TikTok user @jojofish13 made a video compilation of Zelensky playing over the song “Whatta Man” by Salt-N-Pepa. It’s clear that the Zelensky fever is running rampant, and there seems to be no cure.

On a more serious note, Zelensky is not only an inspiration to the ordinary Ukrainian, but also to Jews around the world. Being the descendent of the only surviving sibling in a family killed by the Nazis is accomplishment enough. However, being the Jewish president of a country with an extremely long and extensive history of antisemitism is incomprehensible. This feat is comparable to the 2008 US election where a black man (Barack Obama) was elected president of a country with a deep and dark history of racism. Zelensky’s election is a triumph, and he is finally receiving the praise that he deserves.

Zelensky once claimed, “I am not a politician.” He is right; he is not a politician. He is just an average citizen with a humble beginning who has a real, authentic love for his country. Unlike a large political organization, Zelensky will fight passionately and risk his life to defend his people because he understands what happens when one doesn’t.