Helicopters in Space: A New Mars Mission from NASA 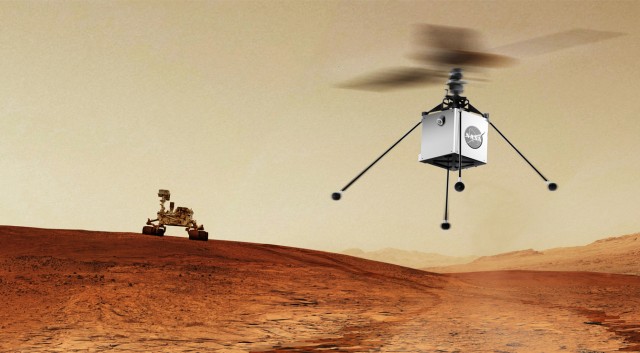 NASA has been making many innovative leaps for the past few decades, and this time, the space agency is sending a fully automated helicopter into Mars’s atmosphere. The agency is launching the project on July 2020, and the helicopter is expected to land on Mars on February of  2021.

NASA engineers were able to develop a four-pound helicopter, about the size of a softball, that is capable of withstanding extremely low temperatures and has a completely rechargeable solar-powered body. The helicopter’s blades are able to rotate at a rate of 3,000 rpm, which is approximately ten times faster than a normal helicopter blade on Earth. Since Mars’s atmospheric pressure is only approximately one percent of Earth’s atmosphere, the engineers had to develop a superlight frame for the drone, while maintaining a durable structure.

A high-tech rover will also accompany the advanced drone during the duration of its journey. The rover will have cameras that can scan organic compounds in rocks as well as a machine that can test the conversion of carbon dioxide to oxygen in the atmosphere.

With the newly developed drone, NASA is planning to take a bird’s eye view of Mars. This drone will be capabl 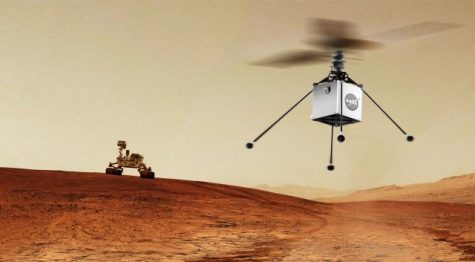 e of producing extremely high-quality images of Mars, better than any current orbiting satellite in Mars’s atmosphere. Due to safety precautions, the drone would be first dropped off from the rover, and after the rover travels far enough to be considered at a safe distance, the drone will turn on and start to fly. Because of the limited amount of power capacity, the drone will only be able to fly for 3-4 minutes and will reach a maximum altitude of 330 feet.

“I really think this mission will work,” said Thomas Lee (‘21), a science enthusiast and a fan of space exploration. “I feel excited and hopeful, and have lots of anticipation. This mission will most likely increase our knowledge about Mars, and could also give us valuable information about space exploration in general. I’m sure that other companies, like SpaceX if they haven’t already, are in the process of doing missions like this. If not, I’m sure that other companies will do similar projects in the future. If this project succeeds, other companies will be motivated to do similar things, and there will be an overall increase in the amount of interest in these future projects.”

So why is NASA sending a drone to Mars? Besides the imaging enhancement of Mars, NASA is ultimately testing the efficiency of sending high-powered drones to other planets in our solar system. If the plan doesn’t work, this would not particularly hurt NASA. If the plan does work, it would be a great step for space exploration and will prove to engineers that drones are viable for space exploration, and can be applied to much more ambitious journeys in the near future.