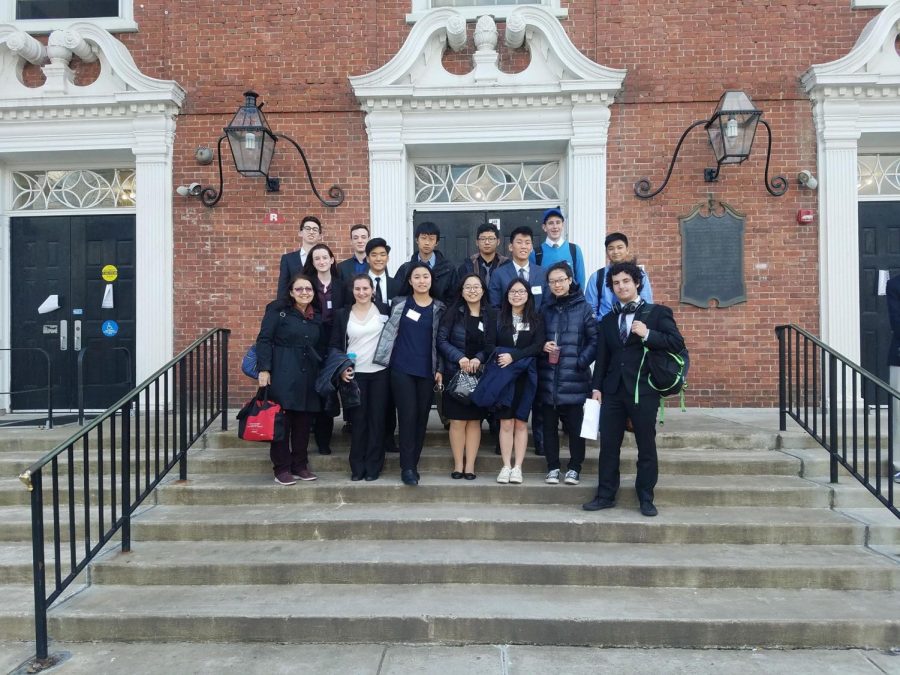 On March 16, Tenafly High School students Noam Yakar (’21) and Angela Youn (’19) qualified to the Intel International Science and Engineering Fair (Intel ISEF) after presenting their science research projects at the Nokia Bell Labs North Jersey Regional Science Fair (NJRSF). Noam and Angela won the ISEF Trip Award at NJRSF, the top placement possible at the fair, which will allow them to travel to Phoenix, Arizona to attend ISEF, an excursion that will take place from May 12 to May 17.

The Intel International Science and Engineering Fair is the world’s largest and most eminent international science competition for high schoolers. Students may enter a project in one of twenty-two categories, which range from Animal Science to Materials Science to Systems Software. About 1,800 high schoolers worldwide are given the opportunity to attend ISEF annually. Students qualify to ISEF through winning awards at ISEF-affiliated regional or state science fairs. At THS, students enrolled in the Science Research classes are given the opportunity to conduct their own independent research, which may then be entered into NJRSF, the regional science fair for Northern New Jersey.

The process of presenting at regional science fairs is intensive, as shown by the experiences of Yakar and Youn at NJRSF. “I had to make a poster on my own, so I consulted with my teacher, Mrs. Coyle, on making the poster,” explained Yakar. “My poster outlined what I did during the project—my programming, my algorithms—so I presented that poster in front of judges, who then asked me questions pertaining to my poster and my project.”

“So many judges came to me in the span of three to four hours, so I had to be at my peak for a couple of hours,” said Youn. “Whenever the judges come to you, you have to be very friendly and open, but you also have to know your stuff and be able to answer all of their hard questions and not give into the pressure or the stress of the situation. In the end, though, it was really worth it.”

At NJRSF, Yakar’s project won first place in the Biomedical Engineering and Bioinformatics category. Yakar’s project was a full-arm prospective prosthesis with computer vision, which took him about six months to create. His project was created through a remarkably independent process. “I actually did the 3D printing alone, designed the arm on my own, and also soldered and made the electronics on my own,” stated Yakar. To program the arm, Yakar used the programming languages of Python and C++. “I used C++ to control the motors and the Arduino aspect and Python for the image analysis algorithms,” he said.

Despite Yakar’s obvious passion for his project, when he arrived at NJRSF, he didn’t expect to qualify to ISEF. “I was actually finishing the arm the day of ISEF, so I was really stressed out,” he explained. “I didn’t expect to go to ISEF, but now that I am going, it’s certainly a great opportunity.”

Youn’s project, on the other hand, won first place in the Animal Science category. Youn’s project concerns a disease called retinopathy of prematurity, which is the leading cause of childhood blindness worldwide. Retinopathy of prematurity is caused by the disorganized growth of retinal blood vessels, which can cause scarring, retinal detachment, and, in the most severe cases, blindness. “In my project, I used three antibody injections into the eyes of mice, which I saw were successful in reducing the abnormal growth of blood vessels in the eye,” said Youn. “I started the project in the spring of my junior year, but most of my work was done over the summer at Weill Cornell Medical Center, which was the most intensive period of my research.”

Like Yakar, Youn didn’t expect to be given the opportunity to travel to ISEF. “It’s a huge honor,” she explained. “There were so many qualified kids at NJRSF, so I was so shocked and surprised when this happened.” Youn plans on making the most of her experience at ISEF through interacting with students from all over the world and learning about their research.

Both Yakar and Youn have many plans for their projects in the future. Yakar hopes to extend the length of the prosthetic arm and to eventually test the arm on human patients. Over the summer, Youn plans on exploring new avenues with her research in the lab.

Best of luck to both Yakar and Youn at ISEF—they’ll certainly continue to make Tenafly proud.