Following the Roads to Prosperity or Turning America Around with the 360? 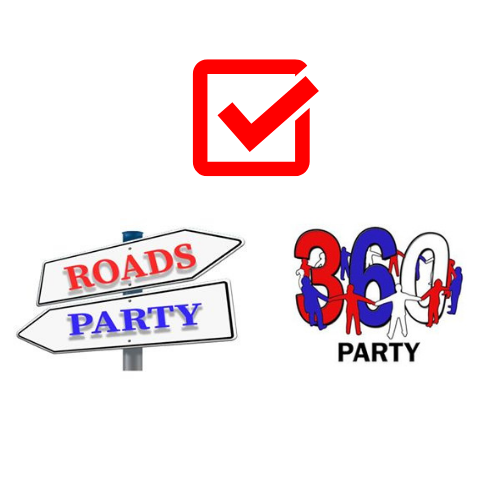 Though there’s still more than a year until the 2020 presidential election, on Friday, June 7, if you’re a THS junior or senior, you can vote in the AP Government and Politics classes’ mock presidential election. The mock election is held annually and is the brainchild of the AP Government and Politics teacher, Ms. Cutrone, who wished to teach her students about the electoral process in a more heuristic and hands-on fashion. For her students, the mock election is undoubtedly a formative and critical political learning experience, with the 360 Party’s vice presidential candidate, Abigail Pomeranz (’19), stating, “The biggest thing [the mock election] has taught me is how important PR and how others perceive you are when conducting campaigns, as well as the sheer amount of work that needs to go into it, in terms of how many people are involved. You see the two candidates, but then there are all the minds behind them, doing so much of the work so that they can be successful.”

The Roads Party’s vice presidential candidate, Anya Kasubhai (’20), agreed with Pomeranz, stating, “You really get to learn a lot about important issues and how to support issues you normally wouldn’t want to support. It’s a good experience, since we actually learn what it takes to run a political campaign—it seems a lot easier than it really is.”

For those who are still undecided about which party they should support this Friday, here’s a quick rundown of the parties’ platforms.

As stated by the Roads Party’s campaign manager, Dan Rudiak (’19), the party’s three main issues are “promoting [the] regulation of guns, making marijuana legal on a federal level, and supporting immigrants through legislation, executive orders, and making sure no wall is built between Mexico and America.” The Roads Party is also fiscally conservative and against the concept of deficit spending.

When asked why voters should vote for the Roads Party over the 360 Party, Priyanka Sinha (’19) responded, “Above all, people should vote for the Roads Party over the 360 Party because of the issues we prioritize in our platform—they are the very issues that affect the health and safety of every American and the very issues that determine what ideals and fundamentals we truly stand upon in this country. There is no doubt that gun violence has become a health epidemic in the United States, yet the 360 Party not only chooses to put “supports the Second Amendment” at the forefront of their policy on guns, but also only upholds background checks as a security measure. These background checks already exist in almost every state and were conducted on the very shooters that we have, in recent years, witnessed slaughtering scores of innocent people. On the other hand, we are committed to prohibiting high-capacity ammunition magazines, ending the gun show purchase loophole, and taking on the NRA.”

Continuing, Sinha elaborated upon the Roads Party’s immigration policy. “We are also highly distinguished in our immigration stance, prioritizing a humane asylum policy and a restructuring of ICE, among other things. To our dismay, however, the 360 Party wants to heighten border security, which will inevitably lead to the separation of families and the mistreatment of immigrants in detention.”

One of the most contentious issues in the mock election thus far has been the differing stances of the two parties on abortion, especially as, in real life, laws restricting access to abortion have been passed in multiple states, including Alabama and Ohio. Sinha, in her interview, pushed back upon recent accusations that the Roads Party has been comparatively weak on abortion.

“Though they have attacked us on our abortion stance, we don’t intend for states to retreat into the past and pass laws like the ones that have been implemented in Georgia and Alabama,” stated Sinha. “We promote regulated rights to abortions and contraceptives.”

The Roads Party has sought to reach out to potential voters—particularly first-time voters—through conversing with students on issues that directly affect them, making use of social media, and supporting grassroots movements.

The 360 Party also believes strongly in upholding Roe v. Wade and combating the recent restrictive laws against abortion that have been passed across the nation. It aims to make contraceptives more readily available nationwide, reform the sexual education system and require all 50 states to incorporate contraceptive and STI education into their health curricula, and mandate states to allow abortions to occur within the first trimester of pregnancy, with states being able to regulate abortions as they see fit after these first three months.

Additionally, the 360 Party recognizes the principles described in the Second Amendment and does not intend to infringe upon it. On the issue of foreign policy, the 360 Party believes in the ideal of self-determination for all nations.

Another critical issue for the 360 Party is education. “We see that our country’s education system in incredibly unbalanced and is failing kids across the country,” stated Hawkins. “We will overhaul the Department of Education, as the way it is currently run is failing our students and is wasting taxpayers’ dollars. In a nutshell, we want to increase federal involvement in the education system while not interfering with teachers’ ability to instruct students as they see fit.”

Elaborating upon this, the 360 Party’s campaign manager, Omri Tarlo (’19), stated that the 360 Party believes in providing “more funding to public schools, reforming the Common Core, increasing federal control of K-12 education, reforming public colleges to be more affordable, and closing the education gaps between states, races, and socioeconomic classes.”

When asked why voters should choose the 360 Party over the Roads Party, Tarlo stated, “People should vote for our party because of our values and work ethic. The 360 Party is tackling the most important issues our country faces today. Countless states are violating the Constitution by passing bans on abortions and setting a terrible precedent. We hope to empower women and give them the full and unabridged right to choose what to do with their body. We also hope to make college more affordable and our local public schools better because the US is falling behind its Western counterparts in this department. Additionally, we hope to set up America and the rest of the world for a long and prosperous future full of innovation and prosperity by combating climate change. The Roads Party, conversely, has a weak stance on all of these issues.”

The 360 Party has, like the Roads Party, sought to reach out to voters through using Instagram, particularly by making use of videos. Additionally, both parties have stopped into classes periodically to host town halls with the eligible electorate.

Whichever party you choose to vote for this Friday, the most important thing to do, in the end, is to simply come out and vote—after all, a healthy democracy can’t survive without the presence and participation of an actively engaged electorate.