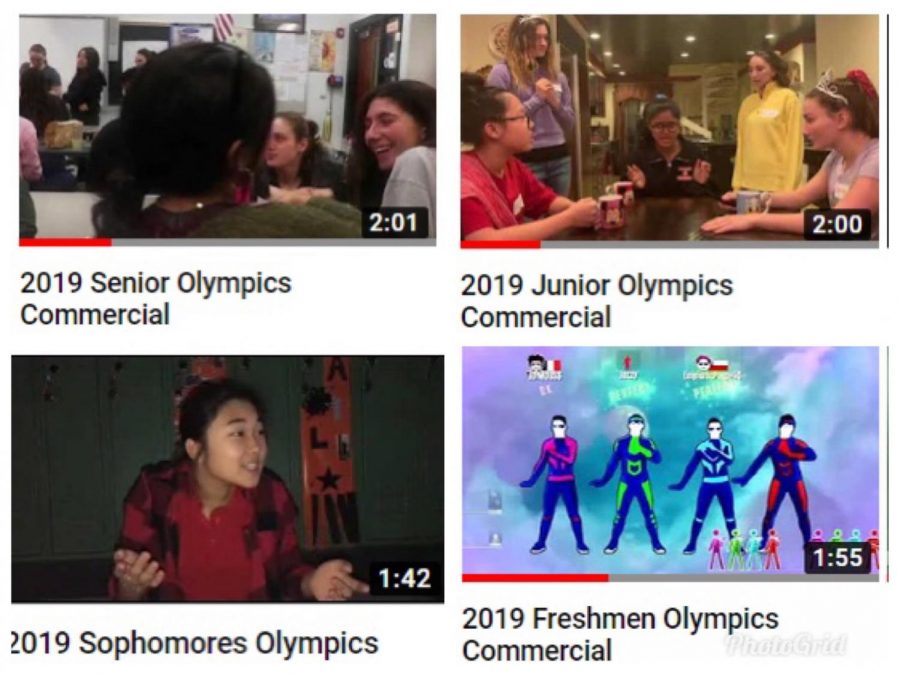 The TV screen displaying the daily morning announcements in your second block class fades to black. Suddenly, abrupt vibrant visuals appear with your class officers compelling you to take action. You instantly know what time of year it is: the Olympics are approaching, and you find yourself watching your class’s team commercial. The long-awaited film is finally here and you suddenly feel a surge of uncontained excitement to see your peers Every year, it is tradition for each grade at Tenafly High School to produce a promotional video in order to endorse its class ahead of the Olympics, which were held this year on Friday, March 1st. In the days before the Olympics, each grade aired its spirited Olympics commercial, beginning with the freshman class’s on Monday, February, 25. Each video showcased its respective grade’s unbridled exuberance for the upcoming ceremonies and events as well as its distinctive sense of humor and creativity.

Here’s a run-down of the four:

The freshman class’s Olympic commercial surely made a pronounced statement for its grade, prominently featuring the viral “Mannequin Challenge,” the now obsolescent social media sensation that found its peak in popularity in 2016. Members from the class of 2022 froze in place while Rae Sremmurd’s infamous “Black Beatles” played in the background. Although the “Mannequin Challenge” was not quite the viral sensation it once was, the freshman class demonstrated to the student body that it could revitalize and acknowledge a media sensation and present it in a way that was newly intriguing.

The junior team’s Olympic promotional video was indisputably one of the most creative videos out of this year’s crop. The Class of 2020’s team name, Disney Juniors, was a direct homage to the Disney channel’s alternate cable television network, Disney Junior; therefore, the commercial was centered around a well developed Disney-esque narrative, in which the principal figure in the promo, class of ‘20 president Anya Kusabhai hits her head while running down the stairs and then falls into a deep coma. Because Anya finds herself in a coma, she loses all her memory regarding the upcoming Olympic events. Her fellow class officers then help her regain her memory about the Olympics through various physical and cerebral exercises. At the end, she remembers everything about the upcoming events and suddenly feels compelled to help her team get the victory for the class of 2020. (It ACTUALLY WORKED.)

The Second Semester Seniors’ commercial was, without a doubt, the most humorous one of this year. It has been recognized by both students and staff at Tenafly High School that throughout the years every senior class uncannily becomes unmotivated in the second semester of each year. Considering that the class of 2019 has ended up in last place for all four years of its Olympics experience, the self-labeled team name was altogether apt. The commercial highlighted several students from the class of 2019 demonstrating their inherent lack of motivation in the classroom, a common disease that has often been described as “senioritis” by much of Tenafly High School’s staff. As a method to combat this ailment, Tenafly High School’s Supervisor of Students hypnotizes each senior in order to cure his or her diagnosed “senioritis.” Unfortunately, her mystic curative didn’t actually work.

What will next year’s competing grades dream up for the 41st Annual Tenafly High School Olympics? Juniors, sophomores, and freshmen, put on your thinking caps!